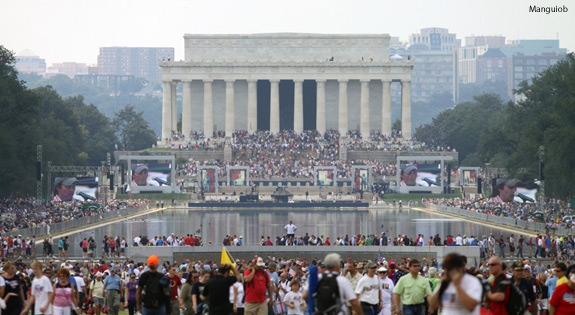 Hours before sunrise Saturday, 250 Liberty students began the trek to Washington, D.C. aboard five tour buses to attend “Restoring Honor,” a peaceful but powerful rally that called all Americans to return to the principles that made our country great — faith, hope and charity.

Sounds of Liberty, Liberty's premier traveling ministry team, kicked off the occasion with an explosive rendition of the National Anthem and closed with “When I Think About the Lord.”

The overtly non-political event, hosted by radio and television icon Glenn Beck, was staged on the steps of the Lincoln Memorial and drew a crowd that Beck estimated to be 500,000, stretching beyond the Washington Monument.

In the days leading up to the rally, some media channels stated that the rally would be a test of Beck’s influence. “Apparently he passed with flying colors,” said Chancellor Jerry Falwell, Jr., who was on the platform with Beck, former Alaska governor Sarah Palin and scores of other religious, civic and business leaders who shared Beck’s plea for unity and “to turn back to God.” 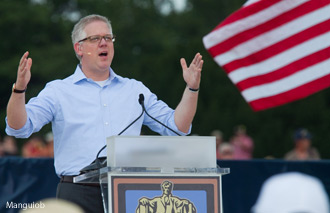 Jessica Morrison, a freshman from Ft. Lauderdale, Fla., said she came to “join others who share our values … to restore our nation to its founding morals and ethics. This is a huge deal for me,” she said.

Falwell said having Beck speak at Liberty University’s Commencement in May was really a turning point for the hugely popular media personality.

“Up until then, [Beck] had not gotten a warm welcome from evangelicals,” Falwell said.

But that appeared to have changed today as thousands of Tea Party activists, constitutionalists and Christians of all stripes banded together peacefully to honor troops past and present and celebrate our great triumphs as a nation.

Dr. Alveda King, niece of the late Dr. Martin Luther King, Jr., blessed the gathering, saying, "If Uncle Martin could be here today, he would sure commend us of giving honor where honor is due." Alveda King’s daughter graduated from Liberty University School of Law in May, and her son plans to graduate from the law school in 2011.

Another Liberty Commencement speaker, Chuck Norris, was also in attendance, as was Christian historian David Barton, a friend of Liberty and frequent speaker on campus.

The event concluded with Beck inviting Falwell and more than 200 other religious leaders to join him on the main stage, a group he dubbed the “modern Black Robe Brigade,” referring to the revolutionary-era preachers that made grave sacrifices for future generations.

Earlier this month Liberty donated two scholarships, together totaling $70,000, that supported the rally and the Special Operations Warrior Foundation (SOWF), an organization dedicated to providing educational opportunities to surviving children of special operations personnel who died serving their country. To date, the organization has raised more than $5 million.

Falwell and his wife, Becki, began the day at a pre-rally breakfast that brought together more than 500 rally sponsors and supporters at the Willard Intercontinental Hotel. Liberty board member Richard Lee opened the meal in prayer, and Glenn Beck spoke, as well as Sarah Palin, SOWF president Bill Carney and former WSET correspondent Courtney Robinson. Falwell concluded the breakfast with comments and a closing prayer.