School of Law awarded full accreditation approval by the ABA 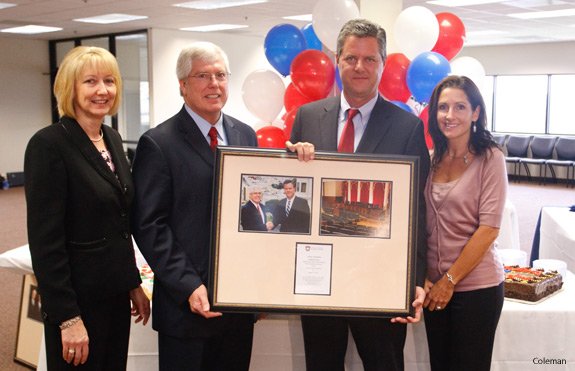 Liberty University School of Law held a celebration Monday after receiving word over the weekend that it had gained full accreditation approval from the ABA. From left, Anita Staver and husband Mat Staver, dean of Liberty University School of Law, pose with Chancellor Jerry Falwell, Jr. and wife Becki, and a plaque commemorating the special achievement.

Liberty University School of Law was awarded full accreditation approval by the American Bar Association Council of the Section of Legal Education and Admissions to the Bar* — which is recognized as the accrediting agency of law schools by the U.S. Department of Education — during its annual meeting in San Francisco on Thursday.

To be eligible to apply for provisional approval from the ABA, a law school must complete a full academic year. Following its opening in 2004, the Liberty University School of Law was awarded provisional approval on Feb. 13, 2006 — a mere 18 months after the first students arrived on campus.

Provisional approval indicates that a law school is in substantial compliance with all the ABA Standards for Approval of Law Schools and allows students to sit for the bar exam. Without the ability to take a bar exam, a person with a Juris Doctorate degree cannot practice law.

A law school must be provisionally approved for a minimum of two years before it is eligible to apply for full approval. Liberty applied for full approval in March 2009 and that following October, representatives from the ABA Council visited Liberty’s campus to conduct a three-day review of the school’s educational law program.

This past June, Dean Mathew Staver, Chancellor Jerry Falwell, Jr., along with Vice Chancellor and Acting Provost Dr. Ron Godwin, appeared before the ABA Accreditation Committee in Washington, D.C., to review the law school’s program. Following this review, the Accreditation Committee concluded that the law school met all the ABA Standards for Approval of Law Schools and recommended full approval.

On Thursday, Aug. 5, Staver and Falwell appeared before the Council for the final round of hearings. Comprised of 24 separate experts in legal education and public representatives, the ABA Council voted to grant full accreditation approval to School of Law on its first application.

“The accreditation approval of the School of Law represents a significant milestone in the history of Liberty University,” Falwell said. “The speed of the approval is a credit to the School of Law and to the quality of its program.”

The meticulous process of applying for and receiving full accreditation can be challenging, but in the end the School of Law will continue fulfilling Liberty’s mission of training students to make a positive impact in the world.

“Obtaining full accreditation approval has been a rigorous but rewarding process,” Staver said. “We knew we had a good program of legal education because our students compete against well-established law schools in every area of competition and they perform exceptionally well.”

“It is a giant step toward the fulfillment of Liberty’s mission to train students to serve Christ and to serve their fellow human beings in every profession and in every walk of life.” Chancellor Jerry Falwell, Jr. said.

Now that the law school is fully approved, it will move forward with plans to launch degrees in addition to the JD. Some of the degrees in planning include various specialties in law (LL.M.), a master’s in Public Policy, and a Ph.D. in law. When implemented, the non-JD degrees will be offered both residential and online.

“Now that the law school has reached this milestone in only six years since it opened, we are ready to move forward with new and exciting programs,” Staver said. “Achieving full approval is a testament to the quality of the law school’s legal education and to the many people who make it possible.”

The law school also plans on launching study abroad programs. The locations include Israel, Europe and Asia. The law school is also considering an accelerated degree program for eligible students to obtain an undergraduate degree and law degree in six years, rather than seven, by combining undergraduate courses and courses from the school of law.

This fall, the law school and Liberty University will announce a dual degree program, allowing law students to obtain a master’s degree along with their law degree in less time when combined together. These degrees include the JD/M.B.A., JD/M.Div., JD/M.A.R., JD/M.Ed., JD/Ed.S., JD/Ed.D., and JD/M.A. in Human Services.

There are only 200 provisionally or fully ABA approved law schools in the country.