‘Voice of the Flames’ announces retirement from sports broadcasting 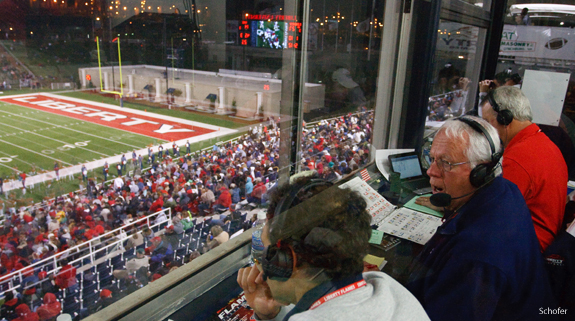 Flames Sports Network announcer Jerry Edwards broadcasts from the press box at Williams Stadium during the Flames' defeat of the VMI Keydets on Nov. 7, 2009.

After 29 years of service, Jerry Edwards has announced his retirement from the Flames Sports Network (FSN).

“Jerry Edwards has been the voice of Liberty University athletics for decades,” said Chancellor Jerry Falwell Jr. “He has been the play-by-play announcer for almost every LU sportscast since 1981 as an unpaid volunteer. … The whole university community owes Jerry Edwards a debt of gratitude for his unselfish service to LU athletics.”

As the station manager for WRVL Victory FM, Edwards realized he will no longer be able to devote the necessary time and preparation into announcing for FSN, given the station’s recent and continuing expansion.

“Over the years, you are called several things,” said Edwards. “My wife has a special name for me, much like any other husband does, and my kids call me dad, which is a big name. My granddaughters call me Papa and I love that name. But for 29 years, I’ve been called the ‘Voice of the Flames,’ and to me that is a pretty special title.”

In order to fill the position left by Edwards, Liberty Athletics has posted an advertisement on the NCAA website. According to Jeff Barber, athletics director, dozens of announcers have already applied.

“Because we’ll now have someone who can do this full time, we plan to expand our network — to add more pregame and postgame shows. … So we’ll be able to expand what we do over the radio and get it more aligned with what top Division I programs are doing,” Barber said.

“[Edwards] was a great role model for Liberty and for athletics,” he added, “and he will be sorely missed.”

Barber said the radio booth in the new press box at Williams Stadium will be named in honor of Edwards for the thousands of volunteer hours he has served at Liberty.