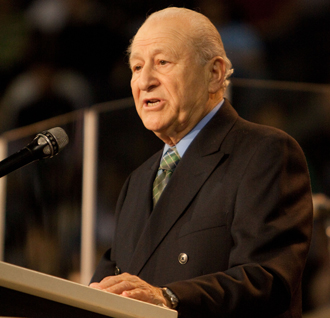 Roth was a guest at Wednesday’s convocation and spoke briefly about his experience.

Born Sept. 2, 1929, in Kosice, Czechoslovakia, Roth found himself at the age of 14 being loaded into a cattle car on a train, along with thousands of other Jews in his city. They were dispersed to concentration camps throughout Europe.

On Wednesday, Roth recalled his arrival in Auschwitz, “the largest death camp ever created by humans.” He remembers jumping off the train along with 4,000 others only to be met by “façade and propaganda” as some were led to the shower rooms. His aunt, his 10-year-old cousin and his grandmother were murdered. Roth survived the atrocities of both Auschwitz and Buchenwald concentration camps.

He will share more of these experiences Thursday night and will also share the joy of liberation for the Jewish people and the rebirth in their nation.

He said it is a privilege to speak at Liberty.

“There are still those who want to destroy the people of Israel on their own land,” he said. “ … And some just stand by. … Here at this university there’s an organization that says, ‘No, you will not do that,’ and will stand with you.” 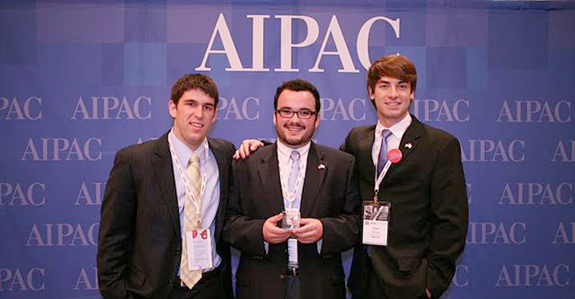 Left to right, Liberty University students Taylor Webb, James Kimmey and Matthew Mihelic accept the Activist of the Year award at the AIPAC conference in March.

Three Liberty University students were presented the Activist of the Year award by the American Israel Public Affairs Committee (AIPAC) during its annual Policy Conference in Washington, D.C. last month.

On behalf of their respective student groups, Matthew Mihelic, Student Government Association president; Taylor Webb, SGA’s vice president of Student Affairs; and James Kimmey, chair of the Stand With Israel Club, accepted the award for their steadfast commitment to pro-Israel politics and widespread education of students on the pro-Israel cause.

“It was an honor representing Liberty University by showing America that we, as the next generation of evangelical Christians in America, support the Jewish people and the right to a free state of Israel,” Mihelic said.

“In the past year, these activists have transformed their campus into a political force for pro-Israel politics. The students from Liberty University serve to inspire activism throughout the country,” said AIPAC president Lee Rosenberg.