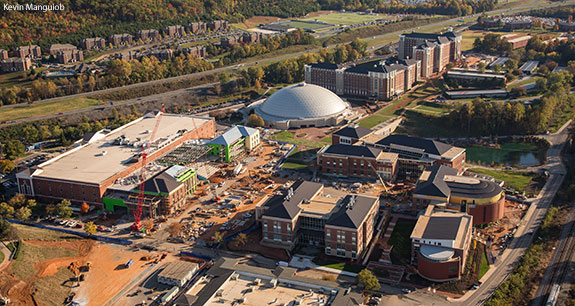 Liberty University’s new four-story, 150,000-square-foot student center is beginning to take shape in the heart of campus. The center, which is scheduled to open by the Fall 2016 semester, will offer new dining options, gaming areas, meeting space, and a bowling alley.

Perry Tate, director of the LaHaye Student Union, said that Campus Recreation will use the student center to provide students opportunities to build relationships.

“We will have an open space for students to play board games, an area where they can check out gaming consoles for video games, and we will also have table tennis and billiard tables,” he said. “The biggest thing we are adding is the bowling alley.”

The alley, he said, will be in the basement level and offer free bowling for on campus students.

The student center is being built onto the back (west) side of DeMoss Hall. When completed, it will feature a grand entryway and large corridors that will connect each of its two wings. A bridge on the north side will connect the center to the Freedom Tower.

The first floor of the center will offer six new dining venues, including Garbanzo’s (Mediterranean), Star Ginger (Asian), UFood (burgers), The Grid Marketplace (a convenience store concept), and Argo Tea, which will be the first teahouse on campus. In addition to interior seating throughout, there will be patio seating on the south and west sides of the building.

The second floor of the center will have a gaming area with billiards and various consoles. The Center for Multicultural Enrichment and Student Activities will relocate from Green Hall to the new center to provide centralized access and increased interaction with students.

Jack Heaphy, student body vice president, said that SGA will be able to use their new location in the student center to work with their various clubs more efficiently.

“In the new student center, we will be in a more centralized location so when students want to bring up their concerns to us, we can be there for them in the heart of campus,” he said.