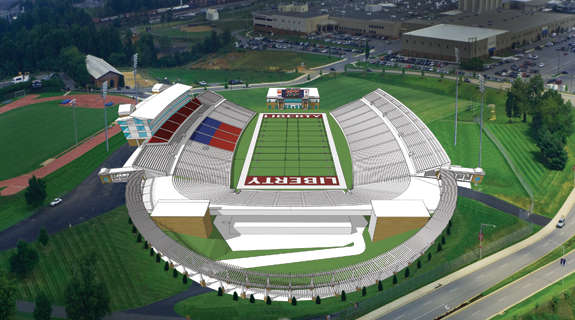 Liberty University announced today that Branch & Associates Inc. of Roanoke, Va., has been chosen as the general contractor for the multimillion-dollar renovations to Williams Football Stadium.

Chancellor Jerry Falwell, Jr. met with company representatives this week. Branch was responsible for renovations to VMI’s football stadium and an addition to the Roanoke Civic Center, he said.

“Liberty University has not worked with Branch in the past, but we have watched the firm from a distance and have been impressed with the projects they have constructed around the state of Virginia,” Falwell said. “We look forward to partnering with Branch to meet the target completion date [for Phase One] of Sept. 4, 2010.”

“This project will mean so much to Liberty University and our football program," he said. "We look forward with great anticipation for opening day of the 2010 football season."

The company will begin moving equipment onto the site next week, with actual work to begin in the next few weeks.

Falwell said Branch agreed to make the stadium available for use for May 2010 graduation ceremonies, even though the first phase of the project will not be completed by then.

Physical changes are already present at the stadium, however, as demolition on the press box began Nov. 30.

The estimated $22 million project, announced in August, includes three phases that will boost the stadium’s seating from its current capacity of 12,000 to 30,000 over the next five years.

Phase One calls for the addition of 5,000 seats to the west side of the stadium, plus a 34,000-square-foot press box. The brick and glass encased, Jeffersonian-style five-story tower will house club-level seating for qualified Flames Club donors, 16 permanent luxury suites, a banquet room that will seat up to 800 people, a 1,000-seat classroom and a state-of-the-art press area. Phases Two and Three will add a new 4,000-seat middeck to the east side of the stadium and 6,400 seats in a horseshoe-shape configuration at the south end zone.

The renovated facility will also ready the stadium for the future construction of upper decks on the west and east sides that will take the capacity to 60,000.