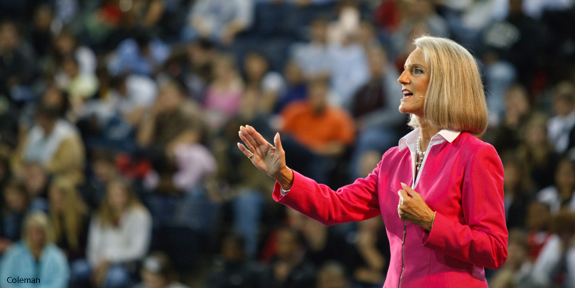 Anne Graham Lotz, the second daughter of the Rev. Billy Graham, made her first visit to Liberty University Wednesday, Dec. 2 as the main speaker at convocation.

She said although she does not usually talk to large audiences of college students, she jumped at the invitation.

“I was intrigued. To have 10,000 students in a chapel service, you’d have to have rocks in your head not to accept something like that,” she said.

For the last 30 years, Lotz has traveled the world teaching the Bible in arenas, prison cells, stadiums, sanctuaries, seminaries and even the United Nations. She hosts a radio program that is heard on more than 700 outlets worldwide. “The New York Times” has named her one of the most important communicators of our time.

Although this was Lotz’s first time on campus, her family has had many ties with Liberty and the Falwell family over the years. In introducing Lotz, Chancellor Jerry Falwell, Jr. called her father “a longtime friend of Liberty University and of our family.” Graham gave Liberty’s Commencement address in 1997. Five of his grandchildren and three great-grandchildren have attended Liberty, and another grandchild, Basyle J. Tchividjian, is a professor at Liberty University School of Law. Falwell and his wife, Becki, last saw Graham at his 90th birthday celebration held last year.

In a message she said was meant to prepare the students for Christmas, Lotz spoke about having a personal relationship with our Savior Jesus Christ. She said so many people only get a taste of the Christian life, likening it to the story of a boy excited to see his first circus, who ran to see the parade of circus animals on Main Street and then left, not knowing the actual event took place in a tent at the edge of town.

“I think there are many people who call themselves Christians who can quote the Scripture and they can pray … and they can give you the Gospel … but they’re just standing on Main Street; they’ve never really entered in to the tent — and the tent is a relationship with God,” Lotz said. “… This is why Jesus came; this is what Christmas is all about; Jesus came down to invite you to come into the tent, to open the door for you to come inside a relationship with His Father.”

With a foundation of John 17, where Jesus prayed for Himself just before He was crucified, she spoke about knowing God through the characteristics revealed in His Son.

With the confident, stern and steady speech resembling that of her own father, Lotz urged students to enter into a relationship where they come to know God — for themselves.

“Listen, dear young person, God doesn’t have any grandchildren. You have to make your own individual decision to claim Jesus as your Savior. … I’m not talking about being raised in church, being baptized, taking communion or coming to Liberty or being in any of these programs,” she said.

“In this part of our world … there are so many people born and raised in the church — it’s part of our culture to go to church … to call ourselves Christians — a lot of people are making an assumption that is false; because the only way you can have a personal relationship with God is that you, yourself, make that individual transaction with God, where you come by faith to the cross. …”

Graham is a best-selling author of 10 books, including her signature book, “Just Give Me Jesus.” She will be returning to Liberty in the spring to film video curriculum to accompany her recent release, “The Magnificent Obsession.” She said the video will include interactive sessions that Liberty University students will have a chance to participate in.

“I’m just thrilled because after I accepted this [convocation invite] and was coming, then we were planning this video curriculum, so when I talked to Chancellor Falwell, he was all up for it,” she said. “We’re coming back in April for that, so that’s very exciting.”

Lotz and her husband, Dr. Dan Lotz, reside in Raleigh, N.C. More information about Lotz and her outreach, AnGeL Ministries, can be found on her website.