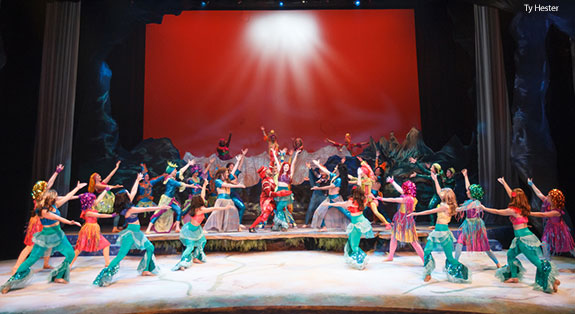 Alluvion Stage Company, Liberty University’s professional theater company, is bringing “The Little Mermaid” to the stage for the first time in Virginia. The premiere at Tower Theater on Friday marks the beginning of Liberty’s 2014-15 mainstage season. The show will run through Oct. 5.

The familiar story and songs, colorful costumes, and lovable characters make this a show the entire family can enjoy. Liberty’s 42-person cast and 21-member crew will help bring the tale to life.

The stage musical is an adaption of the beloved Disney film based on Hans Christian Andersen’s book. The story takes audiences on a magical journey from the ocean floor to land as a mermaid recklessly follows her heart to the surface.

“I like the aspect of two worlds together and learning to respect one another for their differences and their similarities,” said Linda Nell Cooper, artistic director. “You have a beautiful moment where the two worlds come together and the audience gets to see that embracing of each world.”

Cooper uses ballet to reflect the grace and beauty of sea life, distinguishing it from the surface world. Liberty also welcomes a special guest flight director, Paul Rubin, to oversee the aerial stunts.

“(Flying) enhances it. It helps show the difference between under the water and the land,” Rubin said. “You get to see how grounded the actors are up on land, and when you see them in the water, it shows a different world.”

Rubin created the official flight choreography for the Broadway production of “The Little Mermaid” and has traveled around the world with the show. He has more than two decades of experience in the flying industry, working on everything from educational productions to Broadway and international tours. His credits include “Peter Pan” and “Wicked.”

Having worked with several regional and school productions, Rubin said Alluvion Stage Company is one of the most professional he has worked with.

“I think that these guys have pulled it off very well,” Rubin said of his flight choreography. “I did not have to dumb down any of the flying to make it work.”

He said the crew was very teachable and always worked their hardest to get everything right.

“Their dedication shows, their strive for perfection is undeniable,” Rubin said.

As a professional company owned by Liberty, Alluvion offers students of the Department of Theatre Arts chances to collaborate with alumni, professionals, and youth apprentices.

Joel Ledbetter, who received a B.A. in theater performance from Liberty in May, enjoys such opportunities through Alluvion. He plays King Triton in the show.

“I think the collaboration, allowing us to come together, is exciting,” he said. “You have a lot of people who have done professional shows out of state; it brings another level of professionalism. It allows students to be better in the craft of acting.”

By working with Alluvion, Ledbetter said, undergraduates get a “smooth transition” from school to the “real world.” 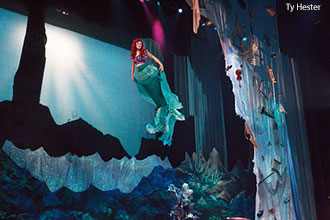 For Rachel Osterhus, who also graduated in May, assuming the lead role of Ariel has provided a wonderful learning opportunity.

“The process of this show tied into what I am learning in life and in my spiritual life,” Osterhus said. “I have learned what it means to rest and seek the Lord’s peace, and worship Him through this (show) because there is joy in it and beauty in it.”

She said Ariel has taught her to “eke every last bit of joy” out of everything, something she hopes will make the performance all the more enjoyable for families.