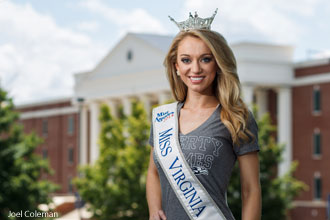 Courtney Garrett, a 2014 graduate of Liberty University, was named the first runner-up in Sunday’s 2015 Miss America Competition, which aired on ABC. Garrett was awarded a $25,000 scholarship.

She is the reigning Miss Virginia, crowned at the Roanoke Civic Center in June, which earned her a $17,500 scholarship as well as a shot at the Miss America crown.

She also placed among the top nine finalists in the pageant’s Quality of Life Award, which recognizes contestants for meeting a legitimate need in serving their local community. Garrett’s community service platform was “Defying Disabilities,” which focused on raising awareness of and empowering the disabled community. Her brother, Austin, has cerebral palsy, autism, and epilepsy, making the issue a personal one for Garrett.

Her concern for the disabled is more than just a platform — she plans to start an organization devoting her life to advocating for those with disabilities.

“I feel that it is God’s calling on my life to be a voice for that community as well as an advocate for their rights and respect in the community,” she said.

Earlier this year, Garrett was crowned Miss State Fair of Virginia 2014. She was also a finalist in this year’s PRWeek Student of the Year competition. Sarah Corder, who also graduated from Liberty in May, was the winner of that award.

Garrett said Liberty prepared her well for her future career, and that faculty and staff encourage students to develop their unique passion.

“Liberty helps you hone that fire,” she said, “to identify what God has put in your heart and that this is where it starts. (So) let that fire grow. Liberty is where you get the tools and training to put it to work in the world … and truly make a difference.”

Following her reign as Miss Virginia, Garrett plans to pursue her M.B.A. at Liberty to further prepare her to start her nonprofit.