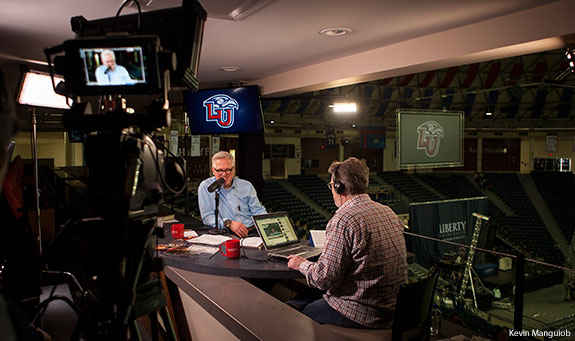 As Liberty University students gathered for the last formal Convocation of the semester — and the final one for graduating seniors — an emotional and forthright Glenn Beck (of radio and television fame) urged them to decide who they will follow. He encouraged them to choose Christ.

“Hear these words: the Gospel of Peace will be the only thing that saves us,” Beck said. “Choose today who you will be. Who will you serve? What is it you want to be remembered as?”

Beck is one of America’s best-known media personalities. He is successful across a wide variety of platforms, including radio, TV, and live stage events. He is also a best-selling author of both fiction and nonfiction.

While on campus, Beck broadcast his daily radio show live from the Vines Center, and announced that his nonprofit, Mercury One, will be giving a $50,000 donation to Liberty. 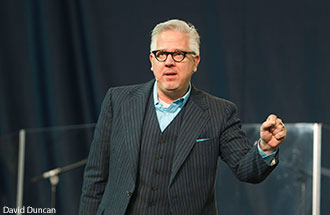 Over the years, Beck has become a strong supporter of Liberty. He was the keynote speaker at the 2010 Commencement and handpicked Liberty students last year to work at his annual Fourth of July event. Beck is a personal friend of President Jerry Falwell, who has appeared on his television program.

Falwell introduced Beck as a patriot and “iconic figure in American culture.”

“Beck is best-known for his message more than his medium,” Falwell said. “He has risen to influence American culture at a pivotal time in our history. His message has engaged millions of Americans in the struggle to preserve the nation’s founding ideals.”

Beck began his talk with a somber tone, sharing through teary eyes how heavily the Lord laid today’s message on his heart. He confessed that he was a lost and hopeless man before he experienced “the atoning power of Jesus Christ.”

“The times are changing, and if we are going to rebuild our nation and keep people free, then we have to look at the source,” Beck said, holding up a Bible. “You have to know what the blueprint is. And the blueprint for freedom … is the Scriptures.”

History shows, Beck explained, that where leaders suppressed others from studying the Bible, or even neglected reading it themselves, tyranny prevailed. As he shared these true stories, Beck held up the Bibles of past world leaders and other artifacts. This is why it is important that we read, dog-ear, write in, and pour over our Bibles, he said.

Though atrocities have been done in the name of Christianity, Beck said it is only done out of misinterpreting or neglecting the message of the Bible. He added that Christians who follow that message rightly are doing much more good for society than anything else.

“Man is free because of the Scriptures. Because of the message of Jesus Christ, we are free, and we are peaceful when we listen, and we shod our feet in the Gospel of Peace,” Beck declared. “The world changes.”

Beck asked students if the Gospel message is something they are willing to stand up or even die for. He told them that they must ask themselves what God is calling them to do. Whatever that may be, he said, it will ultimately be to magnify the Lord and bring Him to others.

God doesn’t intend people simply for a job, Beck told students. He commended Liberty for training students for more than a career but, more importantly, training them to “preserve liberty for all mankind.”

He said humility is a key to empowerment.

With that in mind Beck pleaded with the audience to immediately choose to follow and serve the Lord. By intending to do this now, he said, one builds the strength of character to be steadfast in the midst of turmoil, uncertainty, and injustice. He asked the students what sort of legacy they want to build and eventually leave behind for generations to come.

In an emotionally gripping conclusion, Beck, slightly choked up, pleaded with “the biggest collection of Christian youth meeting in America today” to take that stand.