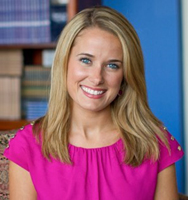 Liberty University alumna Alison Howard (’11) has been named one of the “Five New Rising Stars” by the Republican National Committee.

As communications director at Concerned Women for America, the nation’s largest public policy women’s organization, Howard speaks on pro-life and pro-family issues and has been featured on Fox News, The Blaze, The Christian Broadcasting Network, and other media outlets. She works alongside CWA president and CEO Penny Nance (’88), also a Liberty graduate.

“These new rising stars are an impressive group of leaders who have had a tremendous impact on our party and who I’m certain will play major roles in shaping our party’s future,” Reince Priebus, RNC Committee chairman, said in a press release. “We launched the rising stars program to highlight the incredible talent in our party on a national platform and to a national audience. It also gives us the chance for us to learn from these individuals and their success as we work to grow our party.”

Howard graduated with honors from Liberty and holds a bachelor’s degree in communication studies. At Liberty she was a founding member of the university’s Young Women for America chapter and was a sideline reporter for Flames Sports Network (now rebranded as the Liberty Flames Sports Network).