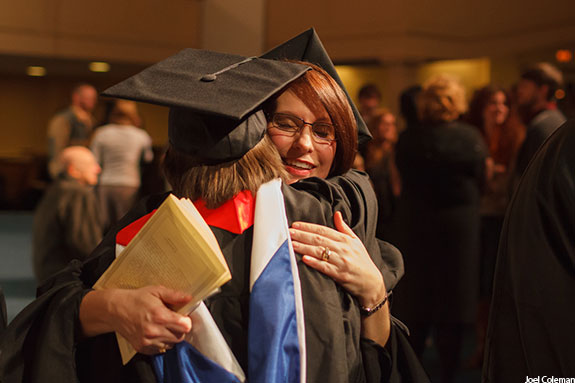 A total of 61 residential undergraduate students from Liberty University’s Department of Nursing, including a dozen members of the Honor Society, and another 41 graduates of Centra’s RN to BSN cohort program received their diplomas Friday night at a winter pinning ceremony that concluded with a “Blessing of the Hands” prayer and anointing.

The biannual event was held in the sanctuary of the old Thomas Road Baptist Church, now home to the Liberty University Baptist Theological Seminary. Several hundred Liberty University Online students graduating with a Bachelor of Science in Nursing were unable to attend. However, they are encouraged to participate in the spring Commencement exercises.

Graduating in December can give students a better opportunity for job placement as competition for positions is not as intense.

"Many of our students are part of the accelerated program which allows students with excellent academic records (minimum 3.25 GPA) to finish the clinical portion of the B.S.N. in 18 months rather than three years," said Dr. Deanna Britt, chair of Liberty’s nursing department.

Students who graduated with their B.S.N. will go on to take their National Council Licensure Examination to become registered nurses. The department’s last graduating class had a 91 percent pass rate for first-time test takers and an equivalent placement rate.

“I am proud that we are sending quality Christian nurses into the profession,” Britt said. “These graduates will be very intentional in taking the love and light of Jesus into their workplaces. We are often told by nurse managers and nurse recruiters all over the country that there is ‘something different’ about our grads. They are seeing the compassion, integrity, and grace of Jesus.”

This winter’s class included 23 CCCP graduates — 14 in adult care and nine in maternal/child care — many of whom have already accepted jobs at the University of Virginia and Lynchburg General Hospital.

Most of the RN to BSN cohort graduates are members of Liberty’s first class of nurses from Centra, through a partnership program started in the fall of 2011. Many became registered nurses after graduating from the Centra School of Nursing or receiving an associate’s degree from a community college nursing program.

“In the push to get all nurses educated at the baccalaureate level, Centra has asked us to deliver our RN to BSN program on-site at the hospital to make it convenient for their nurses to return to school,” said Britt, who earned her B.S.N. at Liberty, her Master of Science in Nursing at UVA, and her Ph.D. at Virginia Tech. “We began that program a couple of years ago and are now seeing some of the first large group of graduates. In January we will begin a similar program at the Augusta Medical Center in Fishersville, Va.” 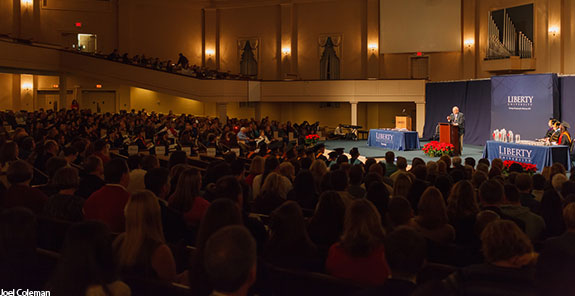