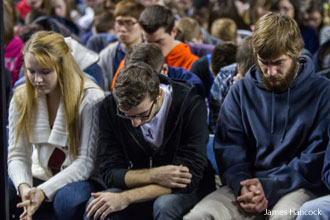 The day after the tragic event involving a Liberty University freshman and a Liberty emergency services officer, President Jerry Falwell, Jr. addressed the student body during Wednesday’s Convocation, urging them to seek help for their troubles before they become overwhelming.

“I know how stressful college life can be and I know at your age that every problem seems to be magnified, not having been through a lot of these types of stresses before,” he told them. “But I urge you to get help. Don’t wait until it boils over; don’t wait until it becomes unbearable. We have professional counselors here, many people who can help you, from faculty to the Student Care Office, and a number of pastors and leaders. Please seek help.”

Falwell asked students, faculty, and staff to continue to pray and support one another. 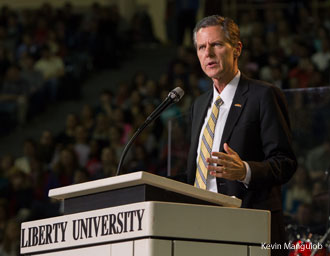 With his brother, the Rev. Jonathan Falwell, joining him on stage as the guest speaker, Falwell shared about how their own family was impacted by a similar event. He told them that their grandfather shot his own brother in self-defense in 1931, and that he carried the burden for 16 years and plunged into alcoholism, which eventually led to his death.

Falwell expressed his sympathy for other tragedies that also occurred on Tuesday, including Virginia Sen. Creigh Deeds, who was stabbed, and Deeds’ son who was found shot to death. He also announced that a Liberty student had learned on Tuesday that his twin brother had died in an accident, and that there was a suicide attempt (unrelated to Tuesday’s shooting) on campus the same day as well.

“We ask that you pray for each other, support each other, help each other get through these events,” he said.

The student body then had a time of prayer, closed by Dr. Ron Godwin, provost and senior vice president for Academic Affairs.

At the end of Convocation, Falwell announced that during the message he was able to speak briefly to the mother of Joshua Hathaway, the student who was killed. Falwell said she had asked him to convey her thanks to the students for their prayers, and for the support of her son’s prayer group, and asked for continued prayers as the family begins to process this tragedy.

In an interview following Convocation, Falwell told the media about the phone call.

At the beginning of the main Convocation message, the Rev. Jonathan Falwell asked that students also remember his brother, President Falwell, in prayer as he leads the university during these difficult times. Rev. Falwell then delivered a fitting, motivational message to students as the semester comes to a close. (Classes are out for Thanksgiving break next week, and then students will have two more weeks before the semester ends and Christmas break begins.)

The message, based on Micah 6:8, focused on the “three greatest aspirations” in life: “To act justly and to love mercy and to walk humbly with your God.” He told students that while culture may tell us that fame, power, and money are the top three, Christians must seek to live out this Scripture in their lives.