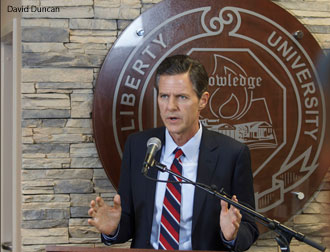 Liberty University President Jerry Falwell, Jr. expressed his deep concern and sadness during a press conference on campus Tuesday afternoon regarding a shooting incident at the Residential Annex II in the early morning hours.

Falwell told the media that he is “deeply saddened by what has happened” and that the university’s “first and foremost concern is the well-being of our students and our community that was impacted by this incident.”

“Our deepest concerns are with the people affected, with the students here, and the family of the young man who was shot. Our prayers and thoughts are with the family and also with the officer who was involved in the shooting,” he said.

He said the university received reports that a Liberty University Emergency Services officer was attacked by a male student in the lobby of the women’s-only residence hall early Tuesday morning. The student was shot and killed and the officer was transported to Lynchburg General Hospital for treatment.

Falwell thanked the Lynchburg Police Department, which is conducting the investigation.

“We appreciate the professionalism and the way they stepped in and dealt with it and we’ll continue to cooperate with them,” he said.

The university has complied with a search warrant.

“We have taken every action that we believe could be taken at this point, and we’re standing by waiting on more facts from police,” Falwell said. “Our focus will continue to be on the safety and emotional health and well-being of our students and our community.” 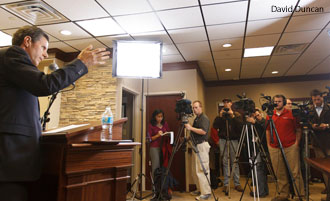 Liberty has been providing professional counseling services to students and staff throughout the day and will continue to offer support services in the weeks ahead.

Falwell said he has received an outpouring of support from people across the state and nation who have contacted him to offer their prayers and services, including Virginia Gov. Bob McDonnell and presidents of other colleges.

Falwell will address the student body during Wednesday morning’s Convocation in the Vines Center and prayers will be offered there for all involved.

“It’s events like this where we feel like it’s our duty as a Christian university to pull together and to support everybody as much as possible,” Falwell said. “That’s what our focus has been all day today and will continue to be throughout this ordeal.”