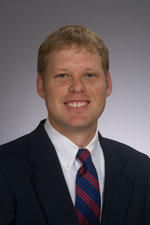 Barry Finke is one of the senior members of the Liberty University Athletic Training staff, having joined the staff in August 2005, and he works with the Flames' football program. Prior to the start of the 2012 football season, Finke was promoted to Senior Associate Athletic Trainer.

Before joining the staff at Liberty, Finke served as assistant athletic trainer at The McCallie School in Chattanooga, Tenn., from 2002-05. He was responsible for initial medical assessment of sport-related injuries during middle school and high school athletic events and practices, while also providing treatment and rehabilitation of injuries which occurred during athletic events.

Finke got his start at The McCallie School in 2001 as a graduate assistant athletic trainer and served in the role for one year before receiving a full-time position.

Upon completing his undergraduate degree at UT-Chattanooga in 2000, Finke served a three-month internship in sports medicine at the Tampa General Hospital in Tampa, Fla., performing various types of rehabilitation including athletic training, cardiac, pulmonary and hand therapy.

Finke, a native of Boaz, Ala., is married to the former Mary Jett. The couple, who currently resides in the Lynchburg area, has three children; Noah, Ella and Emerson.