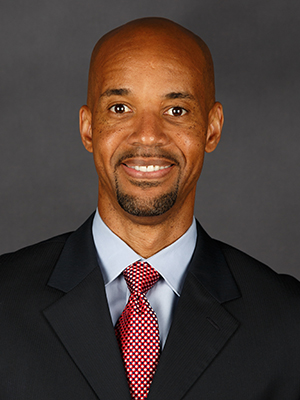 Alexis Sherard is in his 13th season on the Lady Flames' coaching staff, tying him with Andrea "Andy" Bloodworth as the longest-tenured assistant in program history. Promoted to associate head coach prior to the 2017-18 season, Sherard serves as the team's co-recruiting coordinator and assists with game strategies and player development.

Sherard has earned Big South championship rings during seven of his first 12 years with the Lady Flames. Liberty has made seven NCAA Tournament appearances and two trips to the Postseason WNIT Tournament with Sherard on staff.

Sherard has coached the Lady Flames' post players during most of his time on staff. In that capacity, Sherard aided in the development of 2012 graduate Avery Warley. She graduated as the leading rebounder in Liberty and Big South Conference history and then began a WNBA career with the Phoenix Mercury in 2012. Additionally, Liberty has led the nation in rebound margin four times (2009-10, 2011-12, 2012-13 and 2013-14) during Sherard's tenure with the Lady Flames.

Sherard also oversaw the development of the "Big 3" of Katelyn Adams, Catherine Kearney and Ashley Rininger, each of whom wrapped up their time with the Lady Flames in 2015-16. The trio totaled 2,898 points and 2,431 rebounds during their careers.

Most recently, Sherard helped coach post player Keyen Green to Big South Freshman of the Year and VaSID State Rookie of the Year awards during the 2016-17 campaign.

Sherard joined the Lady Flames' staff after spending the 2005-06 and 2006-07 seasons working as an assistant for the Liberty men's basketball team. He also served as the Flames' director of recruiting and aided in post player development.

Sherard came to Liberty after six years of service on Pete Gillen's men's basketball staff at Virginia. Sherard joined the Cavaliers' program in 1999 as the director of basketball operations, serving in this capacity from 1999 to 2002, as well as the 2003-04 season.

During the 2002-03 and 2004-05 seasons, Sherard served as an assistant coach, where he aided in Virginia's recruiting efforts, while assisting in practice planning, game preparation, bench coaching and opponent scouting. Sherard helped guide the Cavaliers to the NCAA Tournament in 2001, as Virginia finished the season with a 20-9 record and was ranked as high as No. 6 in the country. He was also a part of two Cavalier squads which qualified for the NIT Tournament (2000 and 2002). The 2002 squad finished fourth in the event.

Sherard got his coaching career started at Saint Michael's College in Colchester, Vt., where he served as an assistant coach from 1993 to 1995. He assisted the head coach in practice preparation, skill instruction and recruiting. During the 1995-96 campaign, Sherard served as the head boys varsity basketball coach and Dean of Admissions at Lakewood Prep School in Howell, N.J., where he led his team to a 15-7 record and the semifinals of the playoffs.

From 1996-98, Sherard was the administrative assistant at Providence, where he helped guide the Friars to the NIT in 1998 with an 18-12 record and to the "Elite Eight" round of the 1997 NCAA Tournament, as Providence finished the season with a 24-12 overall record.

Prior to joining the staff at Virginia, Sherard served as the assistant coach at Binghamton during the 1998-99 season and was responsible for the Bearcats' recruiting efforts throughout the East Coast.

Sherard graduated with a bachelor's degree in mathematics and education from Saint Michael's in 1993. A member of the Purple Knights basketball team, he was selected to the Northeast 10 Conference All-Defensive team during his junior and senior seasons.

Sherard, who received his master's degree in guidance from Providence in 1998, is a native of Lakewood, N.J., and has two children – Iyana (14) and Elijah (13).