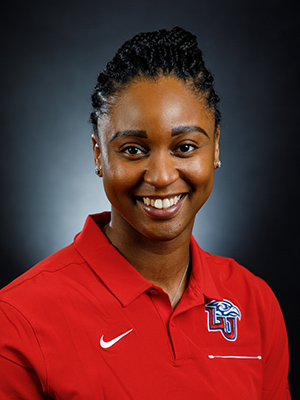 An accomplished outside hitter in her own right during an All-American career at Colorado, Austin helps with Liberty's outside hitters and assists in all aspects of recruiting.

Austin spent the last two seasons as a volunteer assistant coach at Rice where she earned her first collegiate coaching experience. She assisted head coach Genny Volpe during a highly-successful two years. The Owls posted a combined 51-11 record during Austin's time with the program.

Prior to her time at Rice, Austin played professionally in Poland as a member of PTPS.

She has received international playing experience while competing for the BIP/USA Development Team in China in 2013.

Austin, ranked in the top 25 recruits in the 2012 recruiting class by ESPN, was a standout during her four years (2012-15) at Colorado. She finished her career ranked fourth in program history with 1,443 kills, including a career-high 498 kills (4.05 kills per set) as a senior. During 2015, she earned AVCA honorable mention All-America honors and was named to the AVCA All-Pacific South Region team and earned All-Pac-12 honors as both a junior and senior.

A Houston native, Austin helped turn around Colorado's program, one which went 6-24 the year before she arrived. During her four years at Colorado, the Buffaloes posted a 71-59 record, including NCAA Tournament wins in both 2013 and 2014.