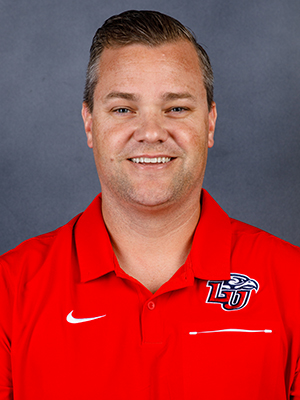 Johnson has guided Liberty to win improvements in each of his first two seasons at the helm. In 2019, the Lady Flames posted a 21-12 record, including 11-5 in ASUN play. Liberty made its first postseason appearance since 2012, competing in the Postseason NIVC, where the Lady Flames earned two wins and qualified for the quarterfinals. The 2019 Lady Flames also posted victories over 2018 NCAA Tournament teams Northern Arizona and FGCU. Liberty was the only NCAA Division I team in 2019 to have three 100-block players, a 1,000-assist player, a 450-kill player and a 550-dig player.

Following the 2019 season, Johnson was named to the VolleyballMag.com Under 40 Coaching Hotshots list.

He led the Lady Flames to a successful first season in the ASUN in 2018, as Liberty finished 10-6 in conference play and 15-17 overall. Liberty became the first volleyball team since ETSU in 2005 to make the ASUN Tournament in its first year in the conference. The Lady Flames posted a six-match home winning streak toward the end of the season, finishing 7-3 at the Vines Center.

Liberty opened the 2018 home schedule with a 3-0 sweep of Virginia on Sept. 11, the team's first sweep of the Cavaliers since 1979. When the Lady Flames swept Stetson on Nov. 8 in DeLand, Fla., it was the 100th career head coaching victory in Johnson's career. He has posted a 122-43 career record combined between his time at Concordia (Calif.) and Liberty.

An accomplished player turned coach, Johnson came to Liberty having the distinction of being the only athlete in the history of the NAIA to win a national championship as a player, assistant coach and head coach. Johnson brought a unique blend of coaching experience to Liberty Mountain, having led a program to the 2013 NAIA national championship and earning NAIA AVCA National Coach of the Year honors.

Johnson spent two seasons (2016, 2017) as assistant coach and recruiting coordinator at Texas A&M. The Aggies landed the No. 18 ranked recruiting class in the country in 2017, as listed by PrepVolleyball.com.

During Johnson's first year in College Station, Texas A&M posted a 21-9 record and earned an at-large bid to the first round of the 2016 NCAA Women's Volleyball Championship.

Johnson's specific coaching duties with the Aggies included working with the program's setters. He helped Stephanie Aiple earn All-SEC honors in 2016 and she was named an AVCA honorable mention All-American.

Prior to his time with Texas A&M, Johnson served as the top volleyball assistant coach at Baylor in 2015. The Bears posted a 20-12 record that season, the program's highest win total in four seasons. Shelly Fanning was named to the All-Big 12 Freshman team, a first in Baylor program history.

During the 2011-12 seasons with Concordia's women's program, the Eagles won the NAIA national title in 2012 with a perfect 38-0 overall record and posted a 37-2 mark en route to a national-runner-up finish in 2011.

Johnson's efforts with the Concordia were recognized by the AVCA in 2011 when he was named the AVCA 30 Under 30 Award recipient and the Southeast Region Assistant Coach of the Year.

Johnson also led the men's volleyball program to a NAIA national championship in 2013 during the program's inaugural season. Following a 25-7 record, he was named the NAIA Men's Coach of the Year and MAMVIC Conference Coach of the Year.

During his final three seasons at Concordia, Johnson served as Director of Volleyball, serving as head women's coach and oversaw the men's volleyball and sand volleyball programs.

Johnson guided the women's program to back-to-back GSAC conference championships and he had seven players earn NAIA All-America honors. In 2014, Rachel Flynn was recognized as the AVCA NAIA Freshman of the Year under Johnson's guidance.

Johnson served as an assistant men's and women's volleyball coach at California Baptist University in Riverside, Calif., during the 2007-09 and 2010-11 seasons. The Lancers posted a 127-39 record in his five seasons with the programs, spotlighted by the men's team winning the 2011 NAIA national championship.

The NAIA powerhouse also recorded wins over nationally-ranked Division I men's volleyball programs during Johnson's time at California Baptist, including No. 2 BYU, No. 3 UC Irvine, No. 4 Stanford and No. 6 UC Santa Barbara.

During the 2010 season, Johnson served as Director of Volleyball Operations at Cal State Fullerton.

Johnson was an accomplished volleyball player on the court during his time as a four-year starter at California Baptist. He helped the Lancers win back-to-back NAIA national titles in 2004 and 2005 and he trained with the USA Men's National Volleyball team in 2005 and 2006.

He was the NAIA national championship assists leader in 2003 and 2004 and finished his career as CBU's all-time assists leader with 3,820, a record that stood until 2011.

Born in Phoenix, Ariz., and raised in Cerritos, Calif., Johnson and his wife, Jane, have a son, Riley, and a daughter, Chloe.