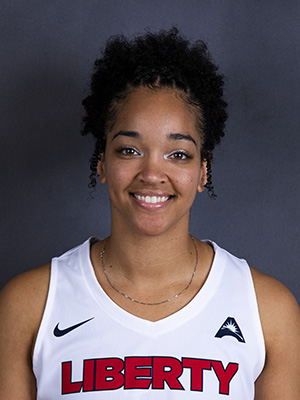 2018-19 (R-So.)
• ASUN All-Tournament Team member after averaging a team-high 15.0 points per game and hitting 9 three-pointers during the tournament.
• Liberty's first-ever ASUN Player of the Week on Jan. 28
• Two-time ASUN Newcomer of the Week (Nov. 12 and Jan. 28)
• Christmas City Classic All-Tournament Team member
• The Lady Flames' leading scorer (12.4 ppg), her 64 three-pointers tied the Liberty single-season record which had stood since the 1989-90 campaign
• Had six 20-point games, beginning with a game-high 24 points during her Liberty debut, Nov. 9 at Bethune-Cookman, highlighted by three free throws with 0.3 seconds remaining which forced overtime
• Scored in double figures in six straight games to begin her Lady Flames career and 21 times on the season
• Posted career highs for points (26) and three-pointers (5) at Jacksonville on Jan. 26, with 16 of her points coming during the fourth quarter and OT
• Tallied a Liberty program-record 16 of her 24 points during the first quarter against Lipscomb on Feb. 12

2017-18 (So.)
• Did not appear in any games during her first year on campus and was redshirted
• Big South Presidential Honor Roll member

Previous School
• Played in 22 games as a freshman at Little Rock, including three starts
• Averaged 2.1 ppg and 1.1 rpg
• Scored a season-best nine points at Appalachian State (Jan. 7) on a trio of three-pointers