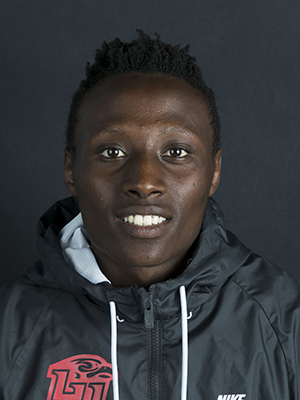 2019 Cross Country (R-So.)
• Liberty's No. 1 runner in all six races, including his runner-up showing at the ASUN meet which earned first team all-conference honors
• Came in 42nd at the NCAA Division I Southeast Regional Championships
• Opened his season with back-to-back victories at the Liberty Challenge and FGCU Invitational
• Placed an impressive third at the Virginia/Panorama Farms Invitational, the best-ever individual finish by a Flame at the event
• Improved his 8K personal best to 24:06.1 at the Pre-National Invitational
• Four-time ASUN Men's Runner of the Week (Sept. 4, Sept. 11, Oct. 2, Oct. 23)

2019 Outdoor Track & Field (So.)
• NCAA national qualifier in the steeplechase and finished 13th, one spot away from making the final
• Qualified for the national meet with a school and ASUN Conference-record steeplechase time of 8:42.43 at the NCAA Division I East Preliminary Round meet in just the third 3K steeplechase of his life
• ASUN steeplechase champion (meet-record 9:04.76) and fifth-place finisher at 1,500 meters
• ASUN Men's Track Athlete of the Week on April 24, following an 8:55.06 effort and second-place finish in his 3K steeplechase debut at the Virginia Challenge
• Came in second overall (first collegiate) in the FSU Relays 2K steeplechase in 5:40.83
• Lowered his 5K personal best to 14:36.14 at the Raleigh Relays