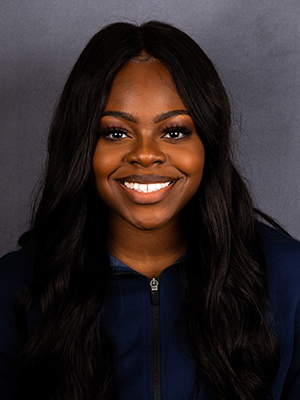 2019 Outdoor Track & Field (So.)
• Made her NCAA Division I Championship debut in the discus, placing 20th
• ASUN hammer champion (personal-best 186-10), discus runner-up and sixth-place finisher in the shot put
• Won Section B of the discus at the Texas Relays, shattering the school record with a 179-6 effort. That was one of her four discus victories on the year, along with the Jim Settle Spring Break Invitational, Gamecock Invitational and Liberty Twilight Qualifier
• Named ASUN Women's Field Athlete of the Week on April 3, thanks to her big performance at Texas
• Heaved the shot put a personal-best 49-9.75 during the FSU Relays, climbing to No. 3 in program history
• Represented the USA Team in the discus at the World University Games in Italy
• ASUN Academic Honor Roll member

2019 Indoor Track & Field (R-Fr.)
• Excelled in the weight throw, winning the ASUN title (Liberty freshman-record 64-7.75) and placing second at the ECAC meet
• Also came in sixth in the ASUN shot put final (indoor personal-best 45-4.25), qualifying to the ECAC championship in a second event

2018 Outdoor Track & Field (Fr.)
• Placed 19th in the NCAA Division I East Preliminary Round discus, including fourth among freshmen
• Big South third-place finisher in both the discus and hammer (Liberty freshman record 184-7)
• Threw the discus and hammer at the USATF Junior Outdoor Championships
• Won the Liberty Twilight Qualifier discus competition at a personal-best 167-0, missing the Liberty freshman record by one centimeter

2017-18 Indoor Track & Field (Fr.)
• Did not compete in any meets for Liberty and was redshirted
• Top mark while competing unattached was a 59-11 weight throw for fourth place at the Liberty Elite Invitational

Prep
• Graduated from Dacula High School
• 2017 Gwinnett County Girls Field Event Performer of the Year after a sensational senior season
• Placed fifth in the discus at the 2017 New Balance Outdoor Nationals
• Captured her second straight Georgia AAAAAA state discus title in 2017, to go along with a shot put runner-up finish
• Threw the discus a school and county-record 157-8, while her top shot put measured 42-4.5
• Also a volleyball standout