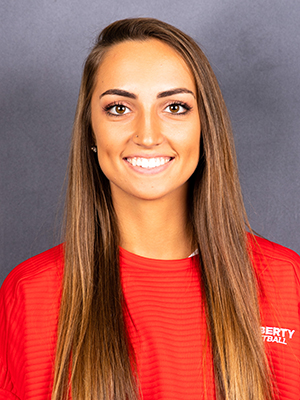 2019 (So.)
• Pitched in 12 games, starting seven times
• Posted a 4-2 record and a 3.55 ERA with one complete game, 15 strikeouts and a .216 opponents batting average in 25 2/3 innings pitched
• Served as a pinch runner seven times, scoring twice and stealing one base
• Earned the win in Liberty's first-ever ASUN victory, a complete-game effort at Kennesaw State (March 16) during which she allowed three runs (one earned) on five hits in six innings pitched
• Struck out a career-high five batters in two innings of relief against Delaware State (Feb. 21)
• Started and pitched 3 2/3 innings of shutout softball in 2-0 win at FGCU (March 31)
• Easton/NFCA All-America Scholar-Athlete
• Named to ASUN Honor Roll

2018 (Fr.)
• Pitched in seven games, starting four times
• Went 2-1 with a 5.25 ERA, two complete games and one shutout
• Earned win in first career pitching appearance, tossing one hitless inning of relief in 3-1 win over Toledo (Feb. 10)
• Started against a pair of nationally-ranked opponents, No. 20/21 South Carolina (March 2) and No. 12/12 Baylor (March 10)
• Went the distance against Baylor, becoming first Liberty freshman since Rachel Floyd in 2004 to pitch a complete game against a nationally-ranked opponent
• Tossed her first career complete-game shutout, April 26 at Hampton, a three-hitter during which she struck out three and walked one
• Named to Big South Presidential Honor Roll

Prep
• Graduated from D.H. Conley High School
• As a sophomore, pitched a complete-game shutout with eight strikeouts in the NCHSAA 4A State Championship game, as her team earned the state title
• Three-time all-conference, all-district and all-county selection
• Named to all-state team as both a junior and senior
• Voted the Daily Reflector Pitcher of the Year in 2016, going 21-4 with a 1.28 ERA, 221 strikeouts, 11 shutouts and three no-hitters in 163 2/3 innings pitched
• Tabbed the Eastern Carolina Conference Softball Player of the Year as a senior, posting a 12-3 record and 2.53 ERA while also batting .328
• In 2012, her team won 12U Babe Ruth League Softball World Series, as she was named to the All-World Series team