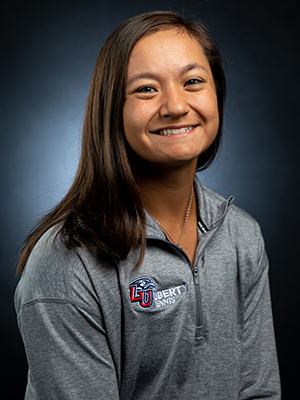 2018-19 (So.)
• Named 2019 ITA Scholar-Athlete for a second straight year
• Garnered inclusion on ASUN Academic Honor Roll
• Won 13 doubles matches on the year, nine in the spring and four in the fall
• Posted an 8-2 doubles record (2-1 in ASUN) in the spring with her partner Kalani Soli
• Captured 11 singles wins on the season, eight in the spring and three in the fall
• Posted 8-4 mark in spring singles matches, including a 3-1 record in ASUN matches
• Claimed seven of her nine singles matches at the No. 5 (3-2) and No. 6 (4-1) positions during the spring campaign
• Reached the final of the Golden singles bracket of the Elon Fall Invitational (Oct. 27-28), posting a 2-1 record in the tournament
• Had a pair of three-match singles winning streaks, both coming in the spring

2017-18 (Fr.)
• Selected to Big South Second Team All-Conference Doubles listing alongside partner Rebekah Anderson
• Voted to VaSID University Division All-State Doubles second team
• Closed out season as the No. 5 doubles unit in the Oracle/ITA Division I Regional Rankings for the Atlantic Region alongside Anderson
• Named to Big South Presidential Honor Roll
• Tabbed 2018 ITA Scholar-Athlete
• Won 20 doubles match on the year, including a 17-2 mark in spring competition
• Posted a perfect 7-0 record in record in Big South regular-season doubles matches
• Held the best No. 3 doubles winning percentage (.882, 15-2) in the Big South with Anderson and finished second overall in winning percentage (.889, 16-2) among all conference doubles teams.
• Won 10 doubles matches in a row with Anderson to close out the year (March 15-April 21)
• Finished the year No. 3 in program history for single-season doubles winning percentage with Anderson
• Claimed eight singles victories on the year, four in the fall and four in the spring
• Closed the season on a three-match winning streak in singles, with each result coming in straight sets

Prep
• Homeschooled
• Four-star recruit in high school
• Ranked as high in the No. 129 in the country as a junior player
• Reached the quarterfinals of the Elon Invitational on the ITA Summer Circuit
• Went to nationals on her USTA Junior Team|
• Posted unbeaten record with USTA Zonal Team
• Maintained a 4.0 grade-point average throughout high school