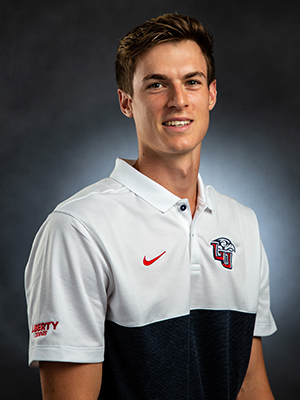 2018-19 (Fr.)
• Unanimously named ASUN Men's Tennis Freshman of the Year, becoming Liberty's third conference freshman of the year in program history
• Selected to ASUN All-Conference first team (singles)
• Unanimous selection to ASUN All-Freshmen team
• Selected as ASUN Player of the Week on Jan. 30
• Honored as 2019 ITA Scholar Athlete while achieving a perfect 4.0 GPA in first year
• Garnered inclusion on ASUN Academic Honor Roll
• Garnered first career national ranking, a No. 53 doubles ranking, from the ITA on Nov. 15 with partner Eddie Gutierrez
• Concluded the year as the No. 17-ranked singles player in Atlantic Region
• Finished second on the squad with 22 singles victories, 16 in the spring and six in the fall
• Held a 12-5 mark at No. 2 singles for the Flames and went 6-1 in ASUN singles contests
• Had a five-match winning streak in ASUN singles play from March 23-April 6
• Led the team with 18 doubles victories, nine in the spring and nine in the fall
• Held an 8-5 record (7-5 No. 2, 1-0 No. 1) in doubles with partner Ian Sturgill in the spring, including a 4-3 mark in ASUN bouts
• Had a trio of three-match doubles winning streaks during the season