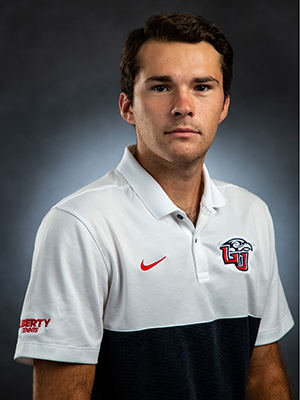 2018-19 (Fr.)
• Garnered inclusion on ASUN Academic Honor Roll
• Won 17 singles matches on the year, nine in the fall and eight in the spring
• Posted a 9-4 mark in fall singles bouts
• Went 3-1 in singles at Liberty University Invitational (Sept. 28-30)
• Claimed two victories in singles main draw at ITA Atlantic Regional hosted by Liberty in the fall
• Totaled 13 doubles victories, 10 in the spring and three in the fall
• Held an 8-5 record (7-5 No. 2, 1-0 No. 1) in doubles with partner Josh Wilson in the spring, including a 4-3 mark in ASUN bouts

Prep
• Homeschooled, also took classes at Central Virginia Community College (CVCC)
• Reached a high of No. 38 in the U.S. senior class and checked in as the No. 2 player in the Virginia senior class upon committing to Liberty
• Won four rounds at the Clay Court nationals and two rounds at the Kalamazoo Hard Court nationals in summer 2017
• Won a Mid Atlantic Sectional Championship Level 3 event in Jan. 2017
• Garnered inclusion on the Dean's List while taking classes at CVCC