Reprinted from the 2011 NCAA Division I Field Hockey Championship program; please see ncaa.com/gameprograms for digital versions of other NCAA programs.

Field hockey is played on the ground, but Liberty University head coach Jodi Murphy is hoping that exposure to the sport will lift the spirits and raise the hopes of hundreds of less privileged children across the globe.

Murphy is the founding director and president of Pathfinder Hockey. Launched in 2008, the faith-based nonprofit is devoted to using the sport of field hockey as a platform for helping young people around the world and in the United States find the path that leads to good health, positive change and hope.

Although it's only been in existence for three short years, the outreach is bearing tremendous fruit and serves as a shining example of the sport's ability to connect people locally and abroad.

So far, Pathfinder Hockey has focused its attention exclusively on Africa, and specifically, Uganda, where it has forged a partnership with a local nonprofit organization called Youth Sport Uganda. Based in the nation's capital city of Kampala, YSU is dedicated to helping young people develop life skills through sports and recreation. The organization also promotes crucial health and educational messages. It operates in most of Kampala's slums and in rural areas of nine districts throughout the country. Field hockey was the first sport YSU offered when it was established in 2006; however, since then its offerings have expanded to include soccer, netball, cricket, basketball, volleyball, korfball, Frisbee/Ultimate, chess, Scrabble and, of course, field hockey.

Field hockey is promoted in six Ugandan districts, including Kampala. YSU estimates between 1,500 and 1,600 youth participate in the sport through twice-weekly clinics, three annual hockey camps, multiple mini tournaments for kids ages 10 to 14, and a girls' team for youth ages 16 to 18.

According to YSU Founder and Executive Director Joshua Opolot, Pathfinder Hockey has continued to help spur interest in the sport among YSU participants by providing funding and contributions of uniforms, hockey sticks and goalie equipment.

Between 2006 and 2008, participation rates in the YSU field hockey program were low. Those numbers rebounded over the course of the following two years, Opolot said, thanks in large part to a donation of assorted equipment from Pathfinder Hockey.

"This increased participation because the equipment was distributed freely to children who couldn't afford it. This removed the financial barrier that was blocking them from participating in sports," said Opolot.

For her part, Murphy is pleased with Pathfinder Hockey's success so far, and she said there's even more that can be accomplished.

"It's awesome to see hockey is such a global sport," Murphy said. "This was an opportunity to say there are other places we can go and impact people through our sport and change lives."

Making it happen
Travelling to Africa was on Murphy's bucket list. The opportunity to check off that particular desire came in 2008, about a year after she graduated from Richmond, where she earned a bachelor's degree in religion and helped the field hockey team claim back-to-back Atlantic-10 Conference titles and two straight NCAA tournament berths.

It didn't matter that the sports mission trip bound for Uganda was based around soccer, and not field hockey.

"I just wanted to go and do my part," said Murphy, who was working as an assistant field hockey coach at her alma mater at the time of that initial trip.

The experience was a positive one, and she returned to American soil unwilling to and uninterested in going back to business as usual.

"It was fun, I learned a lot about myself and I saw this whole different world," she said. "Yet, I was wondering how this could continue to be a part of my life. I didn't just want to close that chapter, and I was praying about it."

Then came the voicemail from Opolot, who had left a message for Murphy in her Richmond office expressing his disappointment that he and she hadn't been able to connect during her travels in Uganda, in spite of a common interest in field hockey. Although initially wary, Murphy returned the call.

After a series of exchanges with Opolot, and working to find out more about YSU, Murphy soon discovered that the organization was fulfilling a critical and serious need in Uganda.

Opolot had been involved in field hockey as a player, coach and administrator. (In fact, he is the current head coach of the Uganda Men's National Team and an executive member of the Uganda Hockey Association.) He launched YSU after a successful career on the turf.

"I realized I was coming to the end of my playing career and I asked myself, ‘if I were to die today, what mark would I leave behind?' I remembered the positive impact hockey had created for me while growing up," he said. "Then I thought of starting up an organization that would help children in the slums where I had grown up. Youth Sport Uganda was started."

Opolot's vision of using YSU to remove barriers that prevent underprivileged adolescents and youth in the low-income demographic from playing in organized sport resonated deeply with Murphy.

"Upon leaving (Uganda) I felt like God was saying there's definitely work you can be doing here," she recalled.

Although her initial idea for Pathfinder Hockey involved branching out to different areas across the world such as India, Uganda had gripped her heart, and there was a sect of people there who were passionate about field hockey.

Said Murphy, "All the pieces fell together in 2008 to try to get something going."

Nurturing the seed
For about the first year and a half, Pathfinder Hockey's efforts were directed toward raising money and collecting gear to ship to YSU in Uganda.

In addition to facilitating a leadership workshop for high-schoolers and leading a coaching course attended by more than 40 physical education teachers, coaches and team managers, the trio conducted a field hockey clinic that attracted hundreds of children from ages 5 to 12.

"Imagine a 100-yard turf filled with more than 200 kids, some with sticks taller than their bodies. Nobody had shoes or cleats. We had 30 balls for 200 kids," recalled Murphy, who said the kids not only were excited about learning a new sport, but also happy to have a chance to get out of the slums and orphanages for a day, enjoy a meal and run around in a safe place. "I can't think of any other time when it was utter chaos, but it was just so fun. There were so many big, big smiles on kids' faces."

Lucido said at moments the experience was almost overwhelming because there was literally a sea of little kids.

"We wanted to encourage them and give them hope that their lives are more than just the present reality," she said. "It's hard to articulate the experience. While people may say we blessed them, it impacted our lives far more." 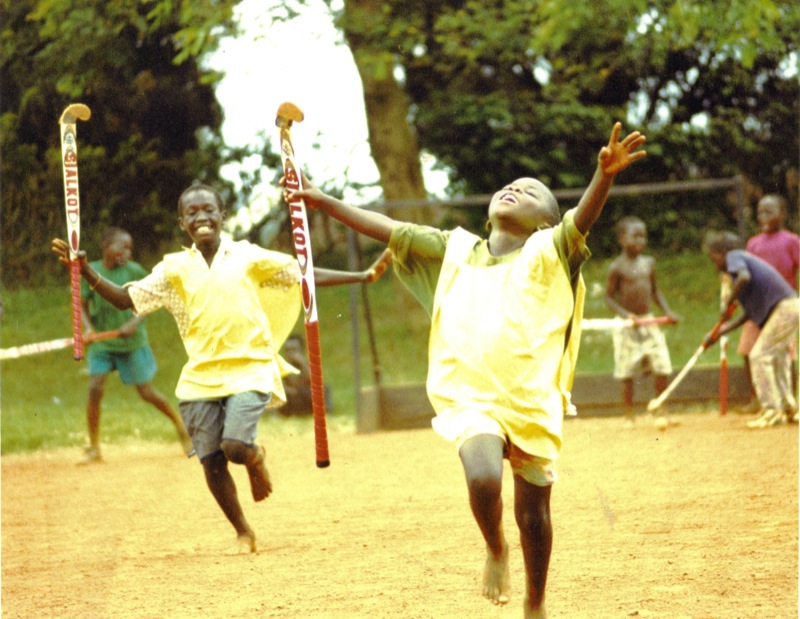 Putting down roots and branching out
When Murphy started Pathfinder Hockey, she wanted to raise awareness of Uganda's history and the needs of the children there. She also wanted to encourage more girls to play sports.

"I see this vision of getting more of the girls involved," she said. "In Uganda, there are so many guys who play sports and so many girls who don't. More and more are starting to come out and seeing they, too, can participate in sport, which is not a cultural norm for them."

There's evidence Pathfinder Hockey has made significant strides toward those goals. Some of the equipment the organization donated was used to jumpstart a YSU hockey team for girls ages 16 through 18. The squad competes in Uganda's National League and enters local tournaments as well. In addition, YSU reported that various schools and communities have taken on field hockey since last year because of the coaching course it organized with Pathfinder Hockey.

In September of last year, Murphy was hired as the head field hockey coach at Liberty, and charged with establishing the program, after the university added the sport as its 11th women's offering.

More than a career advancing move, Murphy enjoys the university's full support of her work with Pathfinder Hockey, and she believes that being at Liberty will only enhance her efforts of spreading the word and providing opportunities to pour into the outreach along side her coaching responsibilities.

Meanwhile, as she settles into her new position, others have made sure that Pathfinder Hockey stays the course.

"We stay in touch with our contacts in Uganda. I've been putting used equipment aside and we're looking to send a shipment," Lucido said. "It's just that support and continuing to build people up when you're a distance away."

Although being in charge of Liberty's field hockey fortunes has left Murphy with less time to devote to advancing Pathfinder Hockey's aims, the initiative remains firmly entrenched on her priority list. Plans are underway for another trip to Uganda this coming summer, and Murphy is hopeful of taking her entire team to the continent in 2013.

Not surprisingly, Murphy is mapping out an ambitious longer-term course for the outreach, as well.

"I've been praying a lot about it," she said. "For me, ultimately, one vision is to raise enough money and support to get a plot of land and eventually create an orphanage and have people on staff. Then you know your foundation is set, and you've made your mark on a place. To really be able to put our roots down is important."

Murphy doesn't plan on establishing those roots just to stay put. She also hopes to extend the nonprofit's reach beyond Uganda, and eventually be in a position to lead other mission trips around the globe. More specifically, she sees the outreach she began with Pathfinder Hockey as a prime opportunity to unite field hockey programs competing in all NCAA divisions in a singular purpose of creating a powerful impact on the world.

"During the season, everyone's out to get everyone, and that's the competitive nature of our sport. But to have teams collect their gear and be able to say here are top level field hockey programs in the United States making a mark," she said. "That's the ultimate goal. It's amazing to know what you do really does help."