Day 9 – During its final full day on the foreign tour, the Liberty men's basketball team spent the morning walking around Nancy, France before loading the bus and heading back to Brussels, Belgium.

With their six exhibition games under their belt, the Flames received some down time in the city, visiting the shops one last time before heading out in the morning.

The team will enjoy one last breakfast at the Brussels Marriott before boarding a noon flight (Central European time) to Dulles Airport. The Flames will be in the air for about seven hours and then spend another three and half hours on a bus before returning to campus late Thursday afternoon (Eastern standard time).

As promised at the beginning of the tour, LibertyFlames.com is pleased to present four videos from the first two days of the trip below. Be sure to check the website tomorrow for the final blog entry  as well as more videos in the coming days.

Celebrity News
An interesting incident occurred during the Flames flight to Brussels that LibertyFlames.com failed to mention on Day 1. Sources report that a celebrity was sitting in first class during the flight – actress and singer (and ex-girlfriend of tennis star Andy Roddick) Mandy Moore. Joel Vander Pol claims to have met the star of the movie Tangled and also says he made his way into first class and served her breakfast. As proof of his encounter with the actress, Vander Pol provided a picture (see below).

There is no doubt that the 6-10 center had a "walk to remember" and he is likely missing the celebrity like "candy" (hopefully Mandy Moore fans everywhere appreciated the movie and song references). 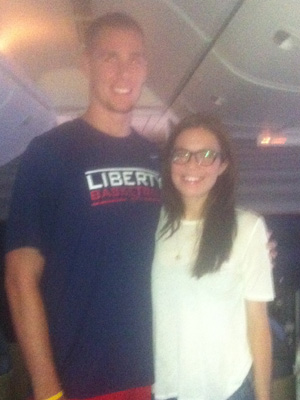