Gabby Shipe has signed a national letter of intent to compete for Liberty in 2011-2012.

Liberty volleyball head coach Shane Pinder has announced the signing of Gabby Shipe to a national letter of intent for the 2011-2012 academic year.

Shipe, a 5-5 libero/defensive specialist from Orlando, Fla., has helped The First Academy Royals win three state championships, while being named to the All-Central Florida second team.

For the Orlando Volleyball Academy/18 Asics Club team, Shipe was part of a squad that made two appearances in the Junior Olympics, with seventh and 11th-place finishes.

"Gabby is a quick, athletic libero who brings great range of motion and play-making ability," stated Pinder. "Gabby will immediately provide depth and challenge for a defensive specialist or libero position on our team. In addition to her volleyball skills, she is a great fit for our university and our program's vision."

In three years as the libero for The First Academy, Shipe posted 1,047 career digs, averaging 3.88 digs per game. She also scored 106 career points and put up 85 career assists during 270 games played.

"Gabby is the type of player who can completely dominate a game with her defense," commented The First Academy varsity coach Michele Moreman. "She is a relentless competitor who has left an incredible legacy at The First Academy. As she joins the Lady Flames, I know Gabby will impact the program with her immeasurable determination and passion for the game."

Shipe is a former teammate of current Lady Flame Loren Thomas, who graduated from The First Academy. Another future Lady Flame, Ansley Gebben, also competed for the Royals. 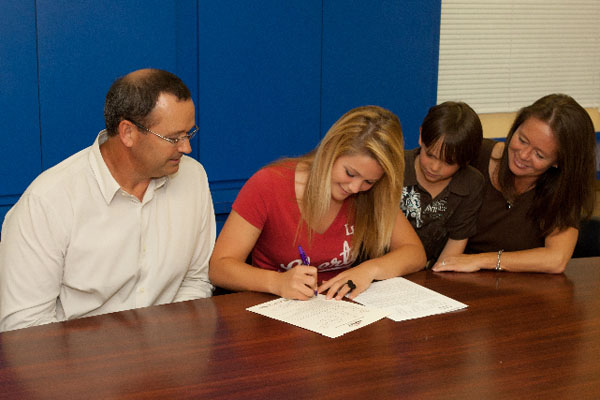 Gabby Shipe signs a national letter of intent as her family looks on.