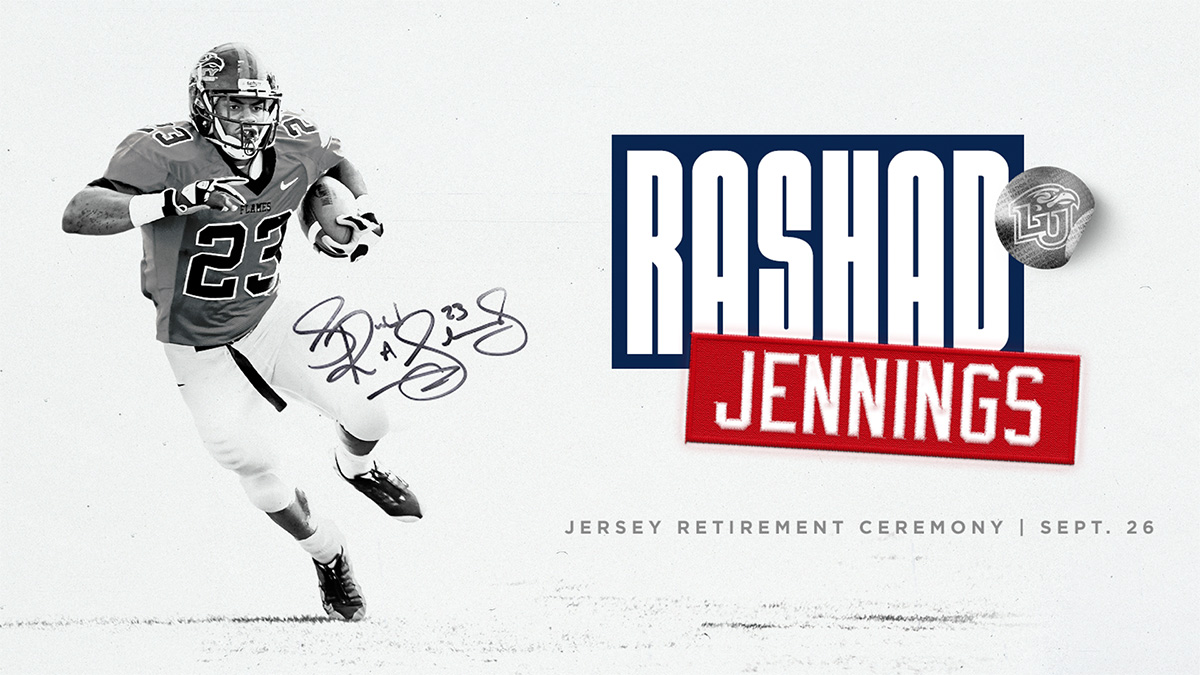 One of Liberty's all-time greats will receive a special honor on Sept. 26 when the Flames welcome FIU to Williams Stadium during College for a Weekend.

One of Liberty's all-time greats will receive a special honor on Sept. 26 when the Flames welcome FIU to Williams Stadium during College for a Weekend.

During the Flames' second home game of the 2020 season, Liberty will retire the No. 23 jersey of former All-American and NFL running back Rashad Jennings. Kickoff for the contest with the Panthers is set for 6 p.m.

Jennings will become the fifth individual associated with the Flames' football program to have a jersey retired, honoring his contributions and accomplishments on the gridiron.

Liberty retired a jersey in honor of Dr. Jerry Falwell in 2006, the school's founder and former chancellor. In 2008, former head coach Sam Rutigliano and tight end Eric Green (No. 86) each had a jersey retired in their honor. During Homecoming Weekend in 2019, Liberty retired the jersey of wide receiver Kelvin Edwards (No. 83).

Although Jennings last donned a Liberty uniform in 2008, the native of Forest, Va., has continued to have an impact on his hometown school and alma mater more than a decade later.

Jennings was a consensus first-team All-American during his senior year when he rushed for 1,526 yards and 17 touchdowns in 2008. He earned his second Big South Offensive Player of the Year award during his senior year, finishing eighth in the voting for the Walter Payton Award (top FCS player in the country).

The bruising running back became the sixth player in program history to be selected in the NFL Draft when the Jacksonville Jaguars picked him in the seventh round in 2008.

Following his professional playing days, Jennings competed as a contestant on the 24th season of ABC's Dancing with the Stars, becoming the fourth NFL player to win the Mirrorball trophy.