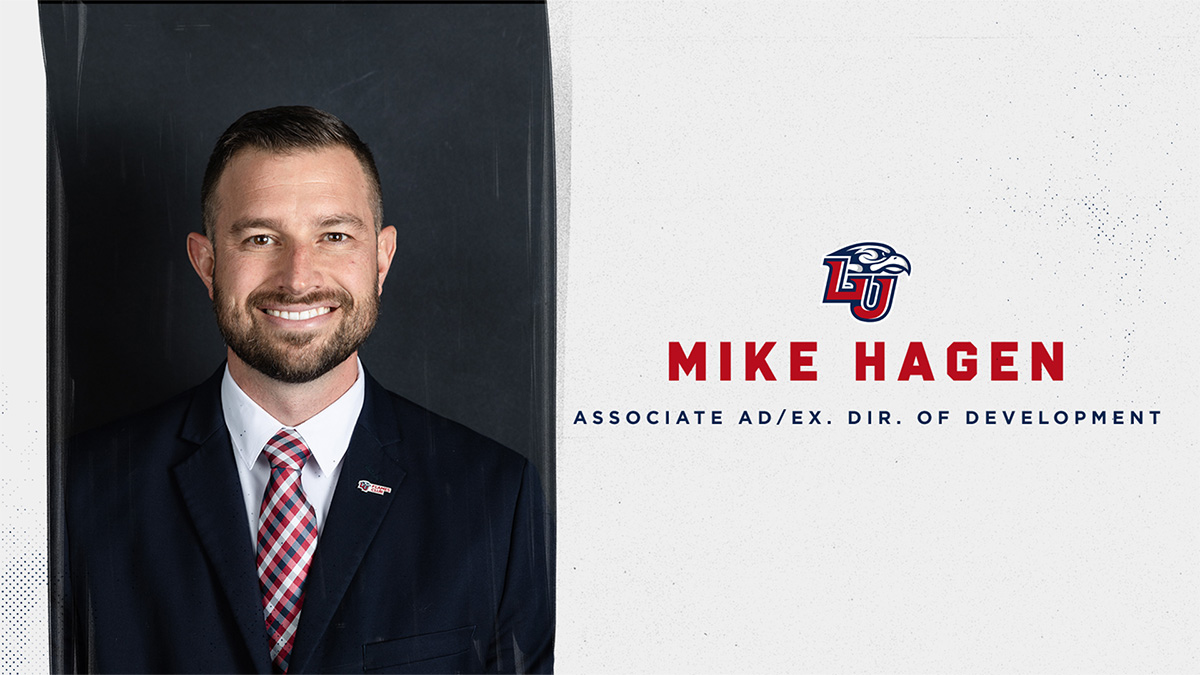 Mike Hagen, a Liberty alumni and a seasoned athletics administrator, has been promoted to the position of Associate Athletics Director and Executive Director of Development.

Mike Hagen, an alumni of the Flames track & field program and a seasoned collegiate athletics administrator, has been promoted to the position of Associate Athletics Director and Executive Director of Development at Liberty University.

Hagen returned to his alma mater in November 2017 when he was named the department's Assistant AD for Development and Director of Major Gifts.

Hagen takes over the Flames Club development leadership role left vacated by Bob Good, who stepped down from his position in January to focus on his campaign for the Republican nomination for Virginia's 5th District Congressional seat.

In his new role as Associate Athletics Director and Executive Director of Development, Hagen will provide leadership to the Flames Club staff, as well as the University Development officers.

"It is my desire to serve the Liberty University community. By serving, we can collectively provide an engaging environment for fans and donors, which won't be rivaled," said Hagen. "We will continue to build on the success of our student-athletes and coaches to create a program that all of Flames Nation will be proud of, resulting in greater support for the Flames Club. Within the entire University, we look forward to supporting our faculty, staff and administrators in the amazing work they bring for our student body."

Since returning to Liberty Mountain, Hagen has helped the Flames Club reach record heights. In the past two years, the Flames Club has grown from around 1,000 members to more than 1,700 active members. Additionally, the Flames Club's annual fund has increased from $800,000 to over $1.3 million, all given to support the success of Liberty's student-athletes.

Hagen led initiatives to launch the Letterwinners Association for former student-athletes and the department's first Giving Day during the fall of 2019.

On Giving Day, Flames Nation united to support all 20 NCAA athletics programs and the cheerleading team to raise over $86,000, with the support of 340-plus donors, 260 which were first time donors to the University.

In addition, Hagen led the development of Fan Fest, the largest pregame event before all home football games located in the Liberty Indoor Practice Facility. Fan Fest brings together food, music and fun for all fans, and averaged over 700 eligible donors at the Flames Club Pregame Tailgate.

In 2019, the Flames Club raised a record $2.2 million through donations, suite and event revenue. Hagen is a member of the National Association of Athletics Development Directors and serves as one of two national representatives of the ASUN Conference.

Hagen rejoined the athletics department after five years at the ASUN Conference (2012-17), where he served on the senior leadership team as Associate Commissioner for Institutional Services.

As sport administrator for cross country, indoor track & field, outdoor track & field, and women's lacrosse, Hagen served as the primary liaison for coaches' committees, national issues and championships. In his diverse role, he also served as liaison to the faculty athletics representatives, athletic trainers, academic administrators and student-athlete welfare committee. In addition, he oversaw appeals of conference policy and sportsmanship issues. Prior to 2015 Hagen served the ASUN as Assistant Commissioner for Compliance.

From 2015 until his return to Liberty, Hagen served as Executive Director of the Coastal Collegiate Sports Association (CCSA), an NCAA Division I conference sponsoring men's and women's swimming & diving and beach volleyball; and provided administration of women's lacrosse for the ASUN and Southern Conferences (SoCon).

Prior to his time at the ASUN, Hagen served on the senior leadership team at Liberty as the Assistant Athletic Director for Compliance (2004-12). His responsibilities included NCAA compliance administration along with sport administration for the track & field and cross country programs. Hagen's involvement with compliance began in 2004 as coordinator, and later as director, before being appointed as Assistant AD for Compliance in 2008.

Hagen holds a bachelor's degree in sport management (2005) and a master's in business administration (2007) from Liberty, where he was a four-year member of the track & field program. He captained the Flames his senior season and was a Big South All-Conference selection in hurdles and pole vault. He was also a member of the LU Student-Athlete Advisory Committee.

The native of Eaton, Colo., remains active in the sport of track and field as an Association Level Official with USA Track & Field. He also serves as a board member for Saruni International, a missions organization dedicated to impacting the lives of young girls in east Africa.

"I'm grateful to President Falwell, Ian McCaw and Jim Nichols, for the opportunity to serve all of Flames Nation in leading the Flames Club staff and our University Development officers. I don't believe there has been a more exciting time to be a Flame. Our fans are unmatched in college athletics, for their desire to win, and to do so while upholding the mission of Training Champions for Christ. We have an unbelievable foundation in the Flames Club. Look at the outpouring of support for our football program at the Cure Bowl, showing our fans are ready, and in the Flames Club, we will be ready to serve them, as well. Since I arrived on campus 19 years ago as a track and field student-athlete, this place has been unbelievably special to my family and I. It's an honor to be a part of Dr. Falwell's vision, and support President Falwell's amazing transformation of this campus, both in athletics and the entire University."
Mike Hagen, Liberty University Associate AD/Executive Director of Development

"We are thrilled that Mike accepted the offer to lead our Flames Club after seeing firsthand his tremendous skills as a fundraiser, plus his ability to cultivate and enhance relationships with former student-athletes and supporters of Liberty Athletics. Mike will play a vital role in the continued success of the Flames Club, as well as the University, as he looks to make a strong impact toward the future success of our athletics programs."
Jim M. Nichols, Liberty University Vice President of Development

"Mike has a robust plan to build upon the growth and momentum that we are currently experiencing in the Flames Club. He and the Flames Club team will provide a high level of service to our donor base while expanding the membership and securing major gifts to support Liberty Athletics."
Ian McCaw, Liberty University Director of Athletics