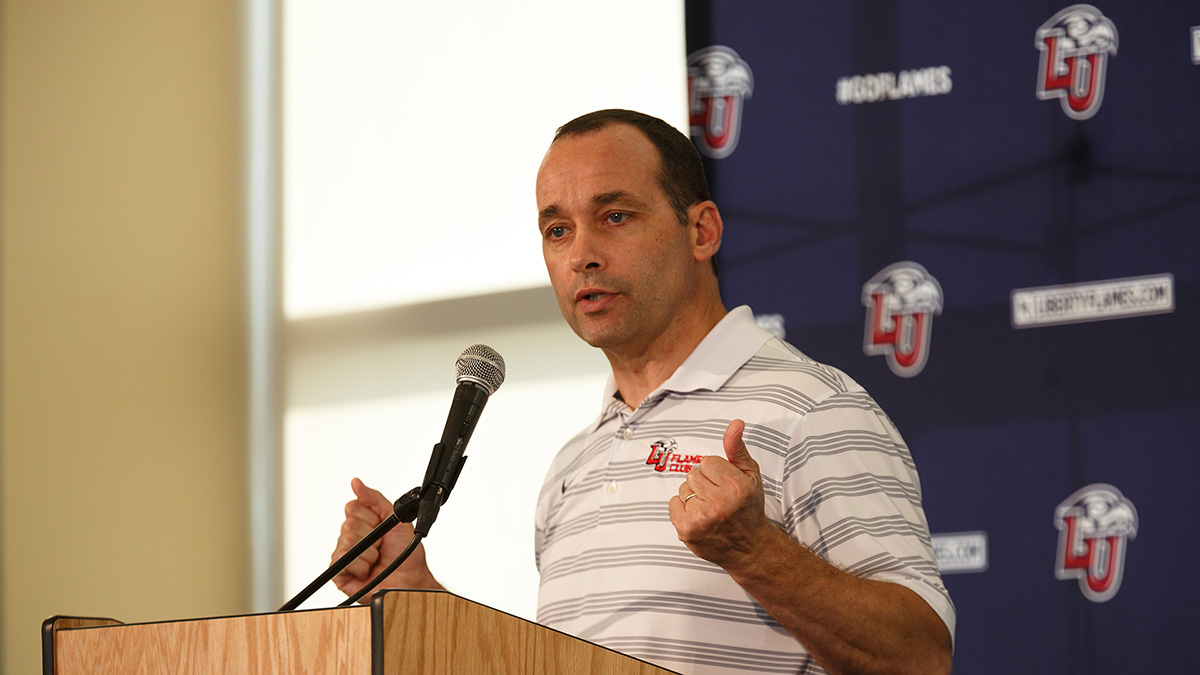 Bob Good, who has spearheaded tremendous growth for Liberty's Flames Club for 14 years, announced today he is stepping down from his position.

Good, who has served as the Senior Associate Athletics Director & Flames Club Executive Director at Liberty University since 2005, is resigning from his position to focus full time on his campaign for the Republican nomination for Virginia's 5th District Congressional seat.

Good's campaign is focused on his principles as a constitutional conservative committed to America's founding Judeo-Christian principles, and his strong support for President Donald Trump's America-first agenda.

Good has served 14 years as a member of the senior staff of the Liberty University Athletics Department and his responsibilities have included the growth and management of the annual fund, coordination of capital campaigns, cultivation of major gifts and luxury suite sales.

Under Good's direction, Liberty Athletics Development generated a record $2.2 million in donation revenue in 2019, bringing the grand total to $18 million in contributions since his arrival in 2005.

Good received his Bachelor of Science in Finance from Liberty in 1988 and was a five-year member of the wrestling team. He also earned his Master of Business Administration from Liberty in 2010, graduating with distinction.

Prior to his 14 year tenure at Liberty, Good worked for CitiFinancial for 17 years finishing his time there as a District Manager for the company.

Good recently finished a four-year term on the Campbell County Board of Supervisors. He formally launched his Congressional campaign on Nov 14, 2019. A district convention will be held this spring to determine the Republican nominee.

"On behalf of Liberty Athletics and the membership of the Flames Club, I want to express my appreciation to Bob Good for his service over the past 14 years and deep commitment to our vision to Train Champions for Christ, provide a high quality student-athlete experience and achieve victory with integrity. Under his direction, the Flames Club has thrived culminating in a record year in both membership and donations in 2019."
Ian McCaw, Liberty University Director of Athletics

"Liberty University has been a major part of my life since my family moved to Lynchburg in 1974 when I was just nine-years old, and that went to another level when I enrolled as a college freshman in 1983. I met my wife at Liberty and the University had a tremendous impact upon both of us. We have been privileged to give back to the school in various ways since we graduated together in 1988."

"We have been donors to the University for over 20 years, two of our children have graduated from Liberty, and our third child is a current student. I am so grateful for the incredible privilege I have had to serve as an employee at the University that I love for these past 14 years, and I could not believe more strongly in its mission and unique ability to Train Champions for Christ."

"I want to especially thank the thousands of Flames Club members who have invested in our program, many of whom have become my dearest of friends. I also want to thank my staff who has labored tirelessly with me these many years, and the wonderful people who I have worked beside in Athletics and in various other departments."

"Finally, I want to express my deep gratitude to Director of Athletics, Ian McCaw, for his incredible leadership and the many ways he has personally supported and encouraged me during our time working together and since I launched my campaign."
Bob Good, Senior Associate Athletics Director & Flames Club Executive Director