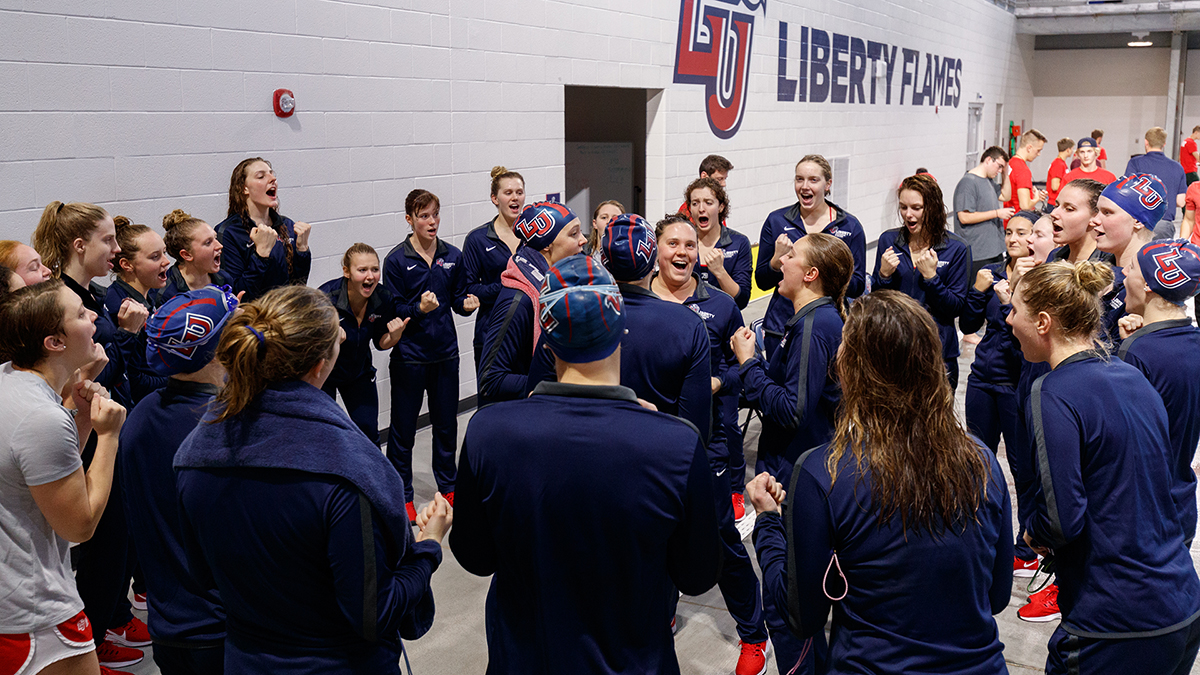 Liberty swimming & diving will compete in the state of Utah for the first time in program history, competing at BYU on Friday and Saturday.

The Liberty swimming & diving team will compete in the state of Utah for the first time in program history, taking on BYU on Friday and Saturday at Richards Building Pool in Provo, Utah.

The meet will begin on Friday at 7 p.m. Eastern time, and Saturday's session will start at 1 p.m. ET. The meet will feature head-to-head dual meet scoring.

The Lady Flames' trip will also allow them to cheer on the Liberty football team, who will be playing at BYU on Saturday at 7:30 p.m. Eastern at LaVell Edwards Stadium.

Team Notes
• Liberty opened the home portion of its schedule with a 203-134 win over UNC Asheville on Oct. 25-26. The Lady Flames are 11-0 all-time in dual meets at the Liberty Natatorium.

• Liberty earned its 100th win in program history to open this season, defeating St. Bonaventure 269.5-82.5 at the Penn State Sprint Fest on Oct. 4.

• Liberty has won each of its last 17 dual meets against CCSA opponents, beginning Jan. 14, 2017 at UNC Asheville.

• 10th-year Head Coach Jake Shellenberger has led the Lady Flames from the program's inception. He has posted a 103-31 dual-meet record, being named CCSA Women's Swimming Coach of the Year three times (2012, 2014, 2019). His teams have gone 54-14 all-time against CCSA competition.

• Liberty won its second-ever CCSA title in 2019, and first since 2014. The Lady Flames scored a meet-record 1,859.5 points while ousting four-time defending champion FGCU by nearly 200 points. It came five years to the day after Liberty's first championship.

• The state-of-the-art Liberty Natatorium opened on Dec. 1, 2017 with the Central Virginia Duals, and was dedicated on Jan. 26, 2018 with an official ceremony. The Liberty Natatorium provides one of the best venues for collegiate swimming and diving in the nation, with a Olympic-sized competition pool and separate diving well and seating for 1,400 spectators in a wraparound setting.

Student-Athlete Notes
• A total of 15 different Lady Flames have recorded at least one individual-event victory this season, after Lauren Chennault (one-meter, three-meter diving), Lindsey Cohee (100 fly, 200 fly) and Abigail Egolf-Jensen (platform diving) picked up their first wins of the season against UNC Asheville.

• Sophomore Olivia Robinson, the 2019 VaSID State Rookie Diver of the Year, scored the most points by a Liberty diver at the 2019 CCSA Championships (62), taking second in both one-meter and three-meter. She holds Liberty's record for platform diving (229.58). Robinson has already qualified for the 2020 Zone Championships in one-meter diving, scoring 267.80 at Penn State.

• The Lady Flames are 4-0 all-time in the Mountain Time Zone, defeating BYU, Air Force, Utah and Colorado Mesa at the 2016 Intermountain Shootout.

Up Next
The Lady Flames will host an in-season invitational for the second year in a row, as the TYR '85 Invite will take place Nov. 22-24 at the Liberty Natatorium.