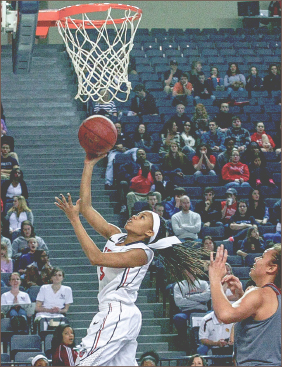 As the regular season comes to an end, the Lady Flames (19-10, 15-5 Big South) and their 10 fellow Big South Conference women’s basketball clubs have their sights set on Myrtle Beach and the upcoming Big South Championship tournament. In a year when even top-seeded High Point University (19-9, 16-4 Big South) enters the tournament with four conference losses, the phrase “March Madness” takes on a whole new meaning. Coaches and players are well aware that any team and any seed could take the tournament any game.

Each team has its own strategy and strengths headed into the tournament. For Liberty’s own Lady Flames, Green said the plan is simple — stick to what has been working late in the regular season.

“As we close out, our team is playing well — shooting the ball well, rebounding well — so we seem to be peaking at the right time,” Green said.

Ultimately, both Green and Hendrix agreed that winning it all will come down to heart and toughness.

“When you get into tournament play, it’s do or die,” Green said. “I really like the effort our team has been giving recently. The phrase we’ve been using is ‘relentless best effort,’ and positive things have come out of it. As we get into the tournament … we’re excited, and we understand the opportunity we have in front of us.”