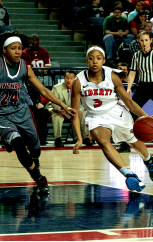 Despite getting off to a slow start, trailing 16-5 with 12 minutes to go in the first half, Liberty rallied from the perimeter. They hit 80 percent of its three-point shots in the half, including a momentum-shifter from guard Emily Frazier five seconds before the halftime buzzer. “The first half, it just wasn’t clicking for the post, but we were getting good looks from sharp shooters on the perimeter, and we knocked some big shots down,” Head Coach Carey Green said.

One of those sharp shooters, sophomore guard Jaymee Fisher-Davis, went 4-5 from behind the three-point line, spurring the Flames comeback with 6:30 to go in the first.

“Coach Green talked in practice about how there are particular people who, whenever they’re open, we just want to get them the ball,” Fisher-Davis said. “I happened to be one of them, and my teammates just do a fantastic job of finding me when I’m open. We have a lot of chemistry. They always know where I’m at and I just try to hit the shot.”

Though three-point success made the difference in the first-half, it was second-half paint play that won the game. Winthrop adjusted its defense to control Liberty’s outside shooting from the first half, putting stifling pressure on the perimeter and forcing Liberty to rely on the inside.

Redshirt sophomore center Katelyn Adams provided the necessary spark in the post, going 7-10 from the field, garnering three rebounds and assists and four critical steals.
“(Adams) attacked the rim very well,” Green said. “And when she does that, good things will happen. We were in a situation where they were putting a lot of pressure on the perimeter, and the post needed to step up. They responded well, and Katelyn really had her mind made up and was more aggressive (the second half).”

Collectively, the Lady Flames doubled their post productivity in the second half. Redshirt-sophomore Ashley Rininger put up 13 points, grabbed 11 rebounds and blocked one shot. Sophomore guard Sadalia Ellis played a role in the team’s inside dominance as well, setting up the Lady Flames bigs with masterful passes for a total of seven assists on
the night.

“We didn’t have great energy starting out, but toward the end of the first half, we really picked it up,” Adams said. Adams and her team expressed similar excitement looking forward to the fast-approaching Big South Tournament.

“Tonight was definitely a statement game,” Fisher-Davis said. “We just wanted it to be a game where nobody in the Big South thinks that they can beat us.”

The Lady Flames return to action when they travel to take on the Radford University Highlanders Thursday, Feb. 27 at 7 p.m.