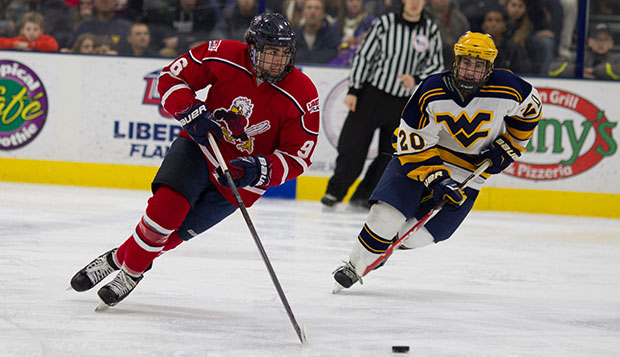 Even down a man, Liberty University's ACHA Division I men's hockey team outscored visiting West Virginia in Saturday night's rematch at the LaHaye Ice Center, a surprisingly decisive 7-0 blowout that could give them a boost in next week's final computer rankings.

Senior forward Christian Garland scored a breakaway goal shorthanded to extend Liberty's lead to 3-0 in the opening two minutes of the second period, freshman goalie Josh Halpenny posted his third shutout and the Flames (23-11-4) completed their first home sweep since Sept. 12-13, when they routed the Richmond Junior "A" Generals.

Liberty President Jerry Falwell and his wife Becki enjoyed a Valentine's Day date night from the comforts of LaHaye's new box seats and the College For a Weekend crowd had plenty to cheer about as the Flames scored twice in the first and second periods and added three more goals in the third.

"I really felt like this might have been one of our best games we've played all year, even without (freshman defenseman Ben) Hughes and (sophomore goalie Matt) Pinel and LeBlanc, and Hannon, too," Flames Head Coach Kirk Handy said. "We had two great crowds and there was a lot of energy in the building, which is really helpful for us."

Playing without the top two scorers in ACHA DI — freshman forward Luke Hannon, the team's first representative in the World University Games, and senior forward Lindsay LeBlanc, one of three Flames suspended for fighting in Friday's 3-0 win — Liberty still managed to overwhelm the Mountaineers (19-14-1), winning for the 12th time in as many tries since WVU moved up to the DI level three years ago.

West Virginia outshot the Flames 36-35, but Liberty had the majority of the high-scoring chances on the night.

The Flames' forward line of sophomores Robert Ward and Grant Garvin, who both contributed two goals and two assists, and senior Ryley Egan (one goal, two assists) accounted for 11 points.

Ward started the scoring just over five minutes after the opening faceoff when he took a fast-break pass from senior defenseman Cam Bakker on the right wing and finished from a tough angle past WVU goalie Ian Donnan. Later, with 2:21 left in the period, Ward helped set up the Flames' second score, sending a backhanded pass from the right end line to senior defenseman Kyle Miller who threaded his backhand assist past a defender to Egan for a one-timer in the right crease.

Miller was sent to the penalty box early in the second period, but Garland capitalized on his second of three breakaway opportunities in the series. After stealing the puck from forward James Murray near the Mountaineers' bench, he accelerated into the offensive zone and deked Donnan with a beautiful move and finish.

Ward pushed the lead to 4-0 with 4:37 left in the period by putting away a pass from behind the net from Egan, with Garvin picking up the secondary assist before Garvin all but put the victory on ice early in the third, pocketing his shot from the right circle off assists from Egan and Ward.

Freshman forward Paul Lamoureux stretched the lead to 6-0 after receiving another perfectly-placed backhanded assist from Miller, who had taken a short feed from freshman forward Luke Simon. Lamoureux cut through the crease and showcased nifty stickwork before depositing the puck inside the right post with the backhand.

With the two teams playing four-on-four, Garvin capped the scoring by pocketing a shot from the high post into the lower right corner off assists from sophomore defenseman Chase Harris and Egan.

Halpenny was spectacular when he had to be, saving a penalty shot and sprawling out to make a few seemingly impossible pad saves seem easy, including a couple in the closing three minutes.

"It was nice to shut the door on that," Handy said of the Flames' second shutout in as many nights after Pinel and Cary Byron combined to blank WVU on Friday. "Halpenny had a solid game in net for us. Our defensive game's going to have to be key for us moving forward, so it was nice to see."

Halpenny received plenty of support from his defensemen and even forwards when the Flames were shorthanded.

"Our penalty kill tonight was outstanding," Handy said. "Those guys who do it night-in and night-out are the unsung heroes of our team, really. "Bram (Erickson), (Danny) Logan, and (Kyle) Garcia were solid for us on the physical end, for sure, and it went up and down the lineup."

Liberty returns to LaHaye next Friday and Saturday nights to challenge No. 3-ranked Minot State in the regular-season-ending series.

"It's going to be a great matchup next weekend and a great way to prepare for nationals," Handy said.