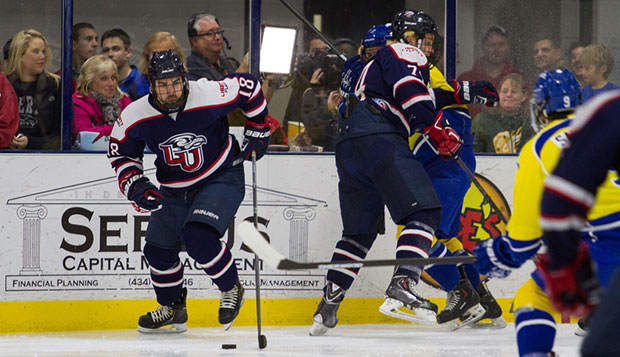 Liberty junior forward Kyle Garcia (18) netted the fourth of five goals, and the second of three in a three-minute span, late in the third period of Saturday's 6-3 win at Delaware.

Limited to one goal through the first two penalty-plagued periods, Liberty University's ACHA Division I men's hockey team stayed out of the box and opened the floodgates in the third, scoring five unanswered goals to stage a dramatic 6-3 victory at Delaware, Saturday night in Fred Rust Arena.

Trailing 3-1 to start the final stanza, the Flames (20-10-4, ranked 12th in this week's ACHA DI poll) reorganized their offensive lines and completed their first two-game sweep in nearly three months after beating Arizona and West Virginia twice in back-to-back series in late October.

"Through 40 minutes, we hadn't played the kind of hockey we wanted to play," Liberty Head Coach Kirk Handy said. "We were in the penalty box more than we wanted to be and weren't making the plays we needed to make to be successful. During the second intermission, (assistant coach) Jake (Hannon) switched the lines up for the third period and we got some good combinations going that had instant chemistry."

Freshman Paul Lamoureux joined the front line of senior captain and fellow Edmonton native Lindsay LeBlanc and sophomore forward Grant Garvin and quickly pulled the Flames back within 3-2 on a goal assisted by LeBlanc and Hughes in the third minute of play.

That's how the score remained until sophomore defenseman Chase Harris netted the equalizer with four minutes remaining in regulation, putting away assists from senior forwards Ryley Egan and Christian Garland on a scramble in front of the cage.

Lamoureux was tripped up 30 seconds later and the Flames quickly capitalized by scoring the go-ahead goal on the power play. Sophomore forward Robert Ward, who joined Egan and junior forward Bram Erickson on the second line, received a long outlet down the right side of the rink and rifled his shot from the corner past Delaware sophomore goalie Dylan Troiano for a 4-3 lead.

With 1:48 remaining in regulation, junior forward Kyle Garcia scored an insurance goal on a quick counterattack, skating the puck out of the neutral zone and across the blue line before beating Troiano whit his shot from the top of the right circle.

Delaware pulled Troiano for the final minute of play and junior forward Tyson Street made the Blue Hens pay by scoring an empty-net goal off an assist from Harris.

"Lamoureux pitched in and Garland and Harris and Garcia and Street," Handy said. "We got big contributions up and down the lineup."

Liberty outshot Delaware 58-34 for the game, including 28-10 in the decisive third period.

"It's huge for us, especially the way we came back," Handy said of the Flames' long-awaited series sweep. "We had an excellent effort in the third period, and especially the last few minutes, when we played really well."

Egan started the scoring for the Flames just a minute and a half into the action, finishing assists from Ward and Garvin with a point-blank shot in front.

Liberty's defense helped make sophomore goalie Matt Pinel (31 saves) a winner for the second night in a row, killing all six of the Blue Hens' power plays on the night, including a long one late in the first period after senior defenseman Cam Bakker was called for a double minor.

"Garland and (senior forward Ryan) Kerr and Garcia and Street had to kill off a four-minute penalty there," Handy said. "(Defensemen Steven) Bellew and (Peter) Shantz played well along with (senior captain Matt) Sherry and Hughes, and Pinel played a solid game. He made some key stops at key times, specifically on the penalty kills."

Liberty returns home for a series against Oakland (Mich.) next Friday and Saturday nights at the LaHaye Ice Center.