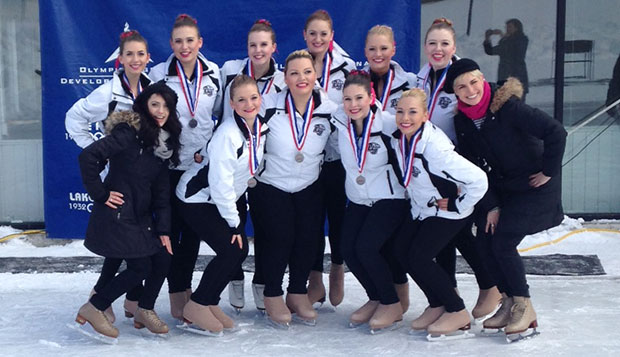 Skating in the Olympic Center rink, which hosted figure skating and ice hockey competitions in the 1932 and 1980 Winter Games, Liberty University's synchronized skating team performed a routine worthy of its first medal in Saturday's Eastern Sectionals in Lake Placid, N.Y.

"The girls did really well this weekend and placed fourth out of eight teams, earning a pewter medal," Lady Flames Head Coach Tatiana Payne said. "This was Liberty's first time receiving a medal at sectionals and we couldn't be more pleased. The team skated a nearly flawless performance."

Liberty placed fourth behind only teams from Princeton, Oswego State, and Vermont and ahead of Syracuse, Boston College, Colgate, and Maryland.

Performing to a routine called "Can-Can Beat," incorporating music from the "Moulin Rouge" and "Can-Can" productions on Broadway, the Lady Flames demonstrated precision on ice and team harmony and synchronicity that impressed the judges, as well as scoring high marks for artistic impression.

"As coaches, we know that there is always room for improvement and we are looking to continue to improve our placement each year at sectionals," Payne said.