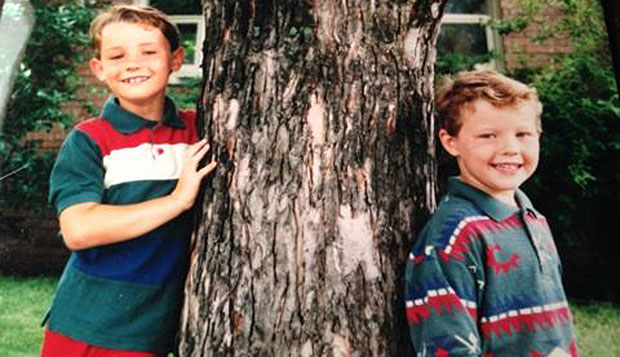 Jake (left) and Luke Hannon were close as brothers growing up, but both drifted from their faith and struggled in their hockey careers before excelling at Liberty.

Skate and Shoot from 1-4 p.m. weekdays at the local rink in Buffalo.

That's where Jake and Luke Hannon — now assistant coach and starting forward, respectively, for Liberty University's ACHA Division I men's hockey team — spent nearly every afternoon growing up. The brothers shared school, karate, and piano lessons, too, but their time on the ice stands out as crisply as a slap shot.

Two years younger, Luke scrambled to keep up with Jake and his friends. They logged hundreds of pickup games before finally suiting up for the same teams. They were brothers, of course, but hockey helped Jake and Luke bond as friends.

As the saying goes, though, all good things must come to an end. The duo's endless hours together dwindled when Jake headed to prep school at age 15, living away from Luke and the rest of their family nine months out of the year. Self-proclaimed vagabonds, and both fully involved in junior hockey, it wasn't long before Luke followed his brother's lead.

Luke stuck with juniors, playing until he was 20 for various high-level teams. Jake, meanwhile, moved on to collegiate hockey — first at Army, for one year, then Amherst College for two.

The roads were different, but the stories much the same.

Far from home and family, Jake drifted from his faith as well.

"I always wanted to be cool and in the popular crowd — somebody that had value because of their social status," he said.

With that goal in mind, his college years were a blur of alcohol, drugs, and constant showmanship. By the time he reached the pinnacle of popularity at Amherst, the means and end alike left him miserable.

"Sometimes God lets us have what we really want so we can see how empty it is," Jake said.

Disillusioned and desperate for change, Jake turned back to life in Christ.

"I believe I was a Christian since I was a kid, but I didn't really know Jesus or understand God," he said. "To me, Jesus was just a perfect guy whose expectations I couldn't live up to. Once I really met Jesus and realized that He loved me, that's when my heart really changed."

With the change of heart came the desire for a change of environment. As the 2011 hockey season rapidly approached, Jake called Liberty's coaching staff and explained his situation. Before long, he was lacing up his skates for the Flames, earning Defenseman of the Year honors as a senior.

The hockey was good, but Jake's off-ice experience was better. His teammates shared his faith. Christian music played in the locker room after games and post-practice church was a team affair. His coaches were also mentors.

"It was unbelievable, just unheard of in the hockey world," he said. "I ate it up… I had so many unanswered questions and so many battles I had been fighting for so long, and there were so many answers in the Gospel and what everybody taught me during that year."

While everything came together for Jake in 2011, Luke's dreams unraveled.

A dynamic forward, Luke recorded 27 goals and 32 assists in 43 games with the Ajax (Ontario) Attack in 2008-09 and 20 goals and 24 assists the next season with the Jersey Hitmen of the Eastern Junior Hockey League. When he signed with the Waterloo (Iowa) Black Hawks of the United States Hockey League, his on-ice future appeared increasingly bright.

However, after fracturing his femur, Luke was sidelined indefinitely.

With his playing career on hold, he headed back to Buffalo, where he coached a high school team and ran a youth hockey program.

Though he wasn't in school, Luke's spiritual situation was similar to Jake's in previous years.

"I was working full-time, but my second occupation was the casino," Luke admitted. "I had a lot of fun doing it at the time, and a lot of success."

More than 500 miles away, Jake continued to build a life in Lynchburg. He married girlfriend Rebecca after graduation, working for Liberty's online admissions and serving as the Flames' team chaplain.

Before the 2013 season, Head Coach Kirk Handy asked Jake if he would be interested in joining Liberty's staff. He gladly accepted the offer, an answer to prayer for him and Rebecca and their two young children.

Luke, by contrast, was finally at a place of dissatisfaction in his life.

Two weeks before the start of the Fall 2014 semester, he visited Jake and his family. The two played golf. Luke spent time with his niece and nephew, then went home and hit rock bottom.

"Through the next week I had some hardships. I lost a lot of money at the casino … things fell apart in my life financially, with relationships and friendships, and I didn't have anywhere to turn," Luke recalled. "I didn't see a very good future for myself in Buffalo. I didn't really see a future at all in my life, or know if I wanted to continue with it."

On Aug. 13, five days before the start of Liberty's fall semester, with his visit fresh on his mind and heart, Luke picked up the phone and called Jake.

It was an opportunity Jake had long prayed for. He called his younger brother back that night and told him the door was open for him to attend Liberty and join the DI team. Luke had 15 hours to consider.

At the end of his rope and with Jake waiting a plane ride away, he packed his bags and went.

"On the flight here, I was a little reluctant still," he admitted. "I knew that it was all I had — either here or maybe rehab — but it was tough for me, mentally, that first day coming down here."

"I sat back and said, ‘Hey, if there's a God, just please reveal yourself.'"

With sign after sign, the Lord did just that, and it was clear Luke was right where he was supposed to be.

Sunday, he attended church with linemate Luke Simon and DII goalie Connor Carew. Between the week's experiences, his friends' influence, and a compelling message, everything finally clicked. Luke stumbled to the altar and gave his life to Christ.

He has since soaked up life at Liberty like a sponge.

"I've learned more in the past few months than I ever would have imagined," he said. "Mentally, physically and emotionally, I'm at a place where I'm able to rest and just be thankful for everything … [Liberty] is a very nurturing place to be."

No one better understands — or is more thankful for — Luke's transformation than Jake.

"Luke and I were always really tight … but how close can you be when you're basically living in pure evil, as both of us were?" Jake said with a laugh and a grimace. "There were rifts because of that, obviously, but God saved us and brought us back together."

Back from the brink and together at the rink was familiar territory for the brothers, but with a twist. The two played together growing up, however never had one coached the other.

"It's just different," Jake said. "I try to remove myself as much as possible when I coach him — I mean, it's my brother, I love him, but we both know we have roles and a job to do."

"Having Jake as my coach — especially with him over the forwards this year — has been super fun, but he's gotta treat everybody the same and makes me work hard for ice time," Luke added.

No one watching him anchor the Flames' top line would guess Luke was three years removed from his last competitive game. He'd kept up with his skating and stick skills, developed his knowledge of the game through coaching, and maintained toughness playing pickup hockey.

"He's obviously a smart player. He's got a really good shot, good hands, and a knack for scoring goals," Jake said. "He plays with a lot of intensity, too. He hits and he's not afraid to go in the corners. He's a good all-around player."

After one semester with the Flames, Luke leads the ACHA with 56 points through 24 games. He was named an alternate captain and is the first-ever Liberty hockey player selected to represent Team USA in the Feb. 4-14 Winter World University Games in Spain.

He attributes his development as a player and a believer to his brother.

"Seeing Jake transform his life pretty radically was really inspirational, and being able to grow as a player and a person here with him as my role model has been the best thing that's ever happened to me," Luke said. "I couldn't be more thankful for such a good brother. We've been through a lot together. For us to reconnect and him to help me through the most pivotal transition in my life has been very humbling."

"We had to wait a while for God's timing to kick in, but the work He's been doing in Luke's life and our family's as a whole has been amazing," Jake added.

Both brothers have come a long way since their childhood afternoons at the rink, but they're thankful to again be sharing what they love most — God, friendship, and hockey.