Willis coaches the way he played, with die-hard intensity 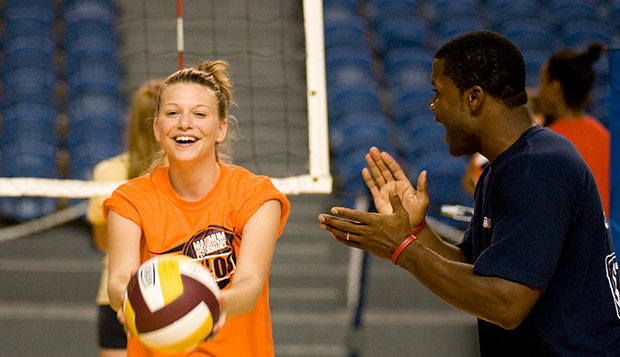 After beginning as a player on Liberty's men's volleyball program in 2003, Johnathan Willis has coached the Flames as well as the women's NCAA Division III program at Randolph College and now serves as an assistant on the Lady Flames' DI team.

As a former player and head coach of Liberty's men's volleyball team, Willis is adept at keeping life in balance in the middle of chaos on the court, with unpredictable, fast-paced action going on all around him.

"I am very busy, but I'm doing the things I'm passionate about," said Willis, who will be one of three inaugural members inducted into the Club Sports Hall of Fame, Friday night in the Hancock Welcome Center. "God's called me to coach and He's called me to serve in a church as well, so I started doing both for the Lord. If you love what you're doing, it's good."

Willis helped turn the Flames' men's team around as a middle and outside hitter from 2003-05, when he was an undergraduate Music & Worship major, and again as a graduate student in 2009, when he was named to the East Coast Championships All-Tournament team as a player/coach.

"Playing and coaching are two very different things," Willis said. "I love the competitive part of playing. I'm one of those people who doesn't ever want to stop or to quit. When I played here, I tried to keep working hard, fighting for it, getting extra reps. And I coach like I played. I don't want anyone to settle. I want them to really learn and absorb the game, to find new ways to get better and be the best players they can be."

He completed his master's degree in Human Services Counseling with a cognate in Executive Leadership while coaching both the Flames' and Randolph College's women's volleyball team, where he served at the helm from 2006-13.

Willis challenged the Flames to raise the level of play, setting the bar high for his successor, former teammate and player Bryan Rigg who was named the National Collegiate Volleyball Federation (NCVF) Coach of the Year last spring.

"I always pushed my guys hard," Willis said. "They had the potential, but needed consistent coaching and accountability to get where they wanted to be. So I pushed them to develop their level of competitiveness, their level of physicality, through discipline and hard work."

Liberty went 20-8 in 2006-07, placing second in the EIVA Southern Conference. Then in 2010, the Flames demonstrated their blocking prowess by finishing third at the NCVF Division II National Championships.

"Defensively, teams always had to work hard to score against us," Willis said. "We were very fast and physical and played with a level of ‘in-your-face' volleyball. We turned it around and got it to be an extremely strong program, which is something I'm still pumped about."