Flames salvage split with Seawolves in clash of top-10 teams 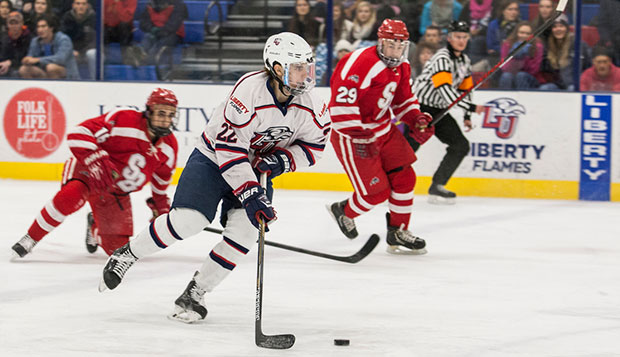 In an extremely physical battle on both sides, featuring several body-crunching checks into the boards, Liberty University's ACHA Division I men's hockey team bounced back once again, doubling up Stony Brook, 8-4, to salvage a split with the Seawolves, Satuday night at the LaHaye Ice Center.

"I was proud of our guys' resolve tonight," Flames Head Coach Kirk Handy said. "It's a tough game to bounce back on Saturday (following a loss Friday night), and a very, very physical two games that we played against Stony Brook. It was two great programs going at it. They got the better of us last night and we got the better of them tonight."

A night after falling to 1-4 against ACHA opponents on Friday night at the LaHaye Ice Center, Liberty improved to 4-1 against those same foes on Saturday nights on its home ice.

The Flames (14-4-4, ranked 10th in this week's ACHA DI poll) asserted themselves in the offensive end in the first period, opening a 3-0 lead on the fifth-ranked Seawolves (13-3). Kyle Garcia broke the ice, crashing the net and finishing a rebound of a shot by senior defenseman Cam Bakker by skipping the puck over the skates of fellow junior forward Tyson Street past Stony Brook goalie Brendan Jones at the 17:22 mark.

Less than five minutes later, senior forward Lindsay LeBlanc won the puck back in the left corner and sent a pass back to freshman forward Luke Hannon, who deflected his cross-crease pass to sophomore defenseman Chase Harris off a Seawolves defenseman past Jones.

Then on a power play, after LeBlanc was leveled following a faceoff, freshman forward Luke Simon netted the first of his two goals from deep in the slot, putting away a putback of a shot by LeBlanc to stretch the lead to 3-0.

"The difference tonight for us was we were finding the back of the net," Handy said, compared to Friday night's 3-1 defeat. "We were putting lots of pucks on net, which was good for us."

However, Liberty has shown this season that no three-goal advantage is secure and penalties nearly cost the Flames again, with Stony Brook capitalizing on three power-play goals in the second period, the first by Sam Brewster on a shot from the top of the right circle.

Following a glove save by Liberty senior goalie Cary Byron on a slapshot by Stony Brook's Ryan Cotcamp, Flames freshman defenseman Ben Hughes stole the puck on the left side of the boards before sending an outlet to LeBlanc, who assisted the first of Hannon's two goals on a perfectly executed two-on-one fast break for a finish in the right crease.

After a five-minute penalty was assessed to the Flames, Cotcamp scored from the top of the left circle before Chris Joseph deflected in a shot by Andrew Balzafiore to trim Liberty's lead to 4-3 with 8:27 left in the second period.

Freshman defenseman Peter Shantz sparked the Flames by levying the second of his crushing checks in the defensive end, smashing the Seawolves' Joseph Bochichio against the corner boards.

Liberty converted on another power-play opportunity when Hughes lifted a wrist shot through traffic from the top of the right circle, restoring the two-goal cushion with 4:01 left in the period.

"The power play looked good tonight and I thought Pete Shantz played an absolutely fantastic game," Handy said. "He was a physical presence for us all night and really turned the momentum of the game when he laid a big hit in the corner. It's a good smart play by Pete and I was proud of our guys' effort. Ben and Peter are just now hitting their stride and we're starting to see them assert themselves inside the locker room, too."

Liberty extended its lead to 8-3 with the first three goals of the third period, starting with another Simon putback in the right slot off another shot through traffic by Hughes. Hannon then capitalized on a five-on-three advantage before sophomore defenseman Steven Bellew finished the Flames' fourth power-play goal, the same number as the Seawolves.

"That was a negative for us tonight," Handy said. "We took way too many penalties. We got fortunate tonight, but their power play is very good. We've got to stay out of the box. That's a big thing for us."

Liberty has a short recovery time before heading to Michigan on Wednesday for three games in three days, Thursday at Davenport to decide the Blue & Gray Cup, and then Friday and Saturday at Oakland.