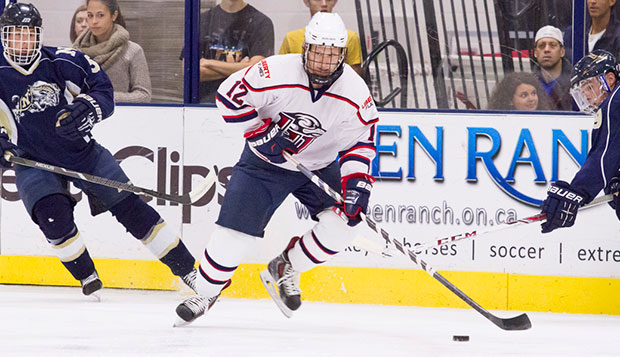 Though not as dominant as in Friday night's 11-1 rout of the Mountaineers, the Flames broke open a 3-2 game by scoring the first three goals of the second period and maintained control throughout the third.

"The first period wasn't a strong period," Liberty Head Coach Kirk Handy said. "We kind of played with them, but we played well in the second and third and got back to our game plan. We started to control the game more, had better puck possession, and started to create opportunities off of that."

"That's three games in a row that we were able to generate more than 50 shots on net, which is another positive, something that will benefit us," Handy said.

Liberty scored two first- and third-period goals off of the power play and netted a shorthanded score by Tyson Street off a spectacular assist from fellow junior forward Kyle Garcia to extend the lead to 6-2 late in the second.

"Kyle Garcia made some great moves and threw it over to Street who buried it," Handy said. "Those are two guys who work hard on the penalty kill and they got rewarded for it."

Senior forward Christian Garland had started the scoring at the 17:13 mark of the first period off an assist from senior defenseman Cam Bakker, who finished assists from senior forward Lindsay LeBlanc and freshman forward Luke Simon on a power play two and a half minutes later.

Holding a tenuous one-goal lead after the first period, Handy was glad to see the Flames respond to put West Virginia away and complete the sweep on its home ice. Senior forward Lindsey LeBlanc capped the scoring with a power play goal off Hannon's second assist just 28 seconds into the third.

"They definitely work hard," he said of the Mountaineers. "We had to have a strong intensity level and had to play a solid game within our system. We aren't too worried about what other teams do. We want to worry about how we're executing, and for five out of six periods, we played our system pretty strong overall. It was a nice way to end the weekend."

Senior goalie Ian Harris made 21 saves, including some critical stops in the first period, to record his second win.

"Especially when it was 3-2, Ian made some big saves at key times to keep us in the game," Handy said.

He was supported on the defensive end by Bakker, sophomore Steven Bellew, and freshman Ben Hughes.

Liberty, which slipped to No. 11 in the latest ACHA DI poll, returns to the LaHaye Ice Center next weekend for a pair of games against No. 14 Delaware, the 2012 national champions.