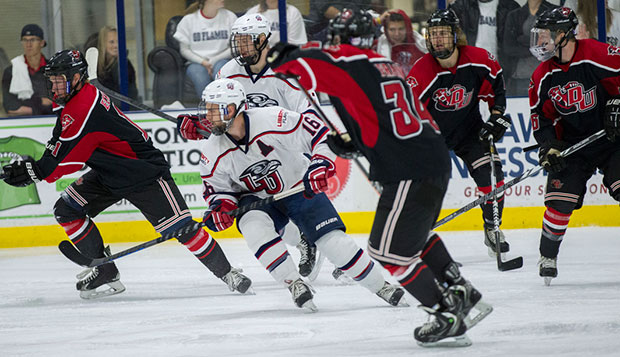 Liberty senior forward Lindsay LeBlanc (16) contributed a critical third goal in the second period off an assist from Bram Erickson.

Hannon, who contributed two assists in Friday night's 4-3 shootout loss to the Panthers, raised his season total to 28 points (12 goals, 16 assists) with the five-goal outburst, including the first two of the second period that broke open a 1-1 contest.

"Everything was working for me tonight," Hannon said. "(Senior defenseman Matt) Sherry told me to shoot the puck a lot, so I was just following the captain's orders."

"Five goals is huge," Liberty Head Coach Kirk Handy added. "Luke's a talented hockey player, but the big thing is he was putting the puck on net and good things happen when you do that. Although Luke put five in, I thought the supporting cast around him really helped him out."

Liberty (8-1-4), which entered the rematch with Davenport on a four-game losing streak that included three shootout setbacks, evened the best-of-three Blue & Gray Cup series with the Panthers at one game apiece. A second straight sensational effort in goal by senior Cary Byron, who was called up from the Flames' Division II team on Friday night, helped seal the victory.

"We were on a tough little four-game skid there with a lot of close games," Hannon said. "It was a good team effort with Cary stepping up and giving us a lot of energy. Every line played as a five-man unit tonight."

Squaring off against former Flames goalie Clayton Brown, Byron more than held his own in Saturday's rematch, making 38 saves as Davenport outshot Liberty 41-31.

"When they did have opportunities, Cary shut the door for the most part," Handy said. "He played really well. He made some big saves for us at key moments and that was big-time for us."

Senior defenseman Cam Bakker played his usual physical contest, helping to dictate the tempo in the Flames' favor in the first two periods.

"Cam was all over the ice," Hannon said. "He's a really versatile guy. He's offensive, he's defensive. But every night he brings consistency and every night he battles hard for his teammates. He's a very selfless player."

An evenly waged first period featured quality saves by both keepers as Liberty cycled the puck in deep to generate some high-percentage scoring chances and Davenport created opportunities off the odd-man rush as well as putting the puck on net from the perimeter.

Davenport freshman Chris Eckler ended the scoreless tie by receiving a pass from Matt Ogden from behind the net and beating Byron with a wrist shot from in the right circle with 3:43 to go.

One minute later, Hannon capitalized with the equalizer after making a steal on the offensive end and pushing the puck to fellow freshman forward Luke Simon between the circles. Hannon received a return pass from Paul Lamoureux and launched a shot through traffic into the upper-right corner of the cage.

"Those guys are fun to play with, Simon and Lamoureux," Hannon said.

Five minutes into the second period, Liberty needed just 19 seconds to take advantage of a power play when senior forward Lindsay LeBlanc won a faceoff in the right circle and Simon set up Hannon with a perfectly placed pass for a one-time finish, again to the upper right corner of the net.

Ten minutes later, junior forward Bram Erickson sparked a Flames fast break by checking Davenport's Chris Ballatore to the ice near the red line and taking the puck in before crossing it to LeBlanc who finished it top shelf for a 3-1 lead.

After beating a defender along the boards and Brown with a shot from the right wing late in the second period, Hannon added two power-play goals in the third period, the first off a second assist from freshman defenseman Ben Hughes, and the Flames narrowly missed three long-range empty-netters in the closing minutes.

"It was a solid effort for our guys tonight," Handy said. "Our mental game was a little better tonight as the game went on."

Liberty plays its next five games on the road, starting with a trip to Arizona State next Thursday and Arizona on Friday and Saturday.

"It was good to definitely get a win here and it will give us a lot of momentum going into Arizona next week," Hannon said. "It should be a fun trip."