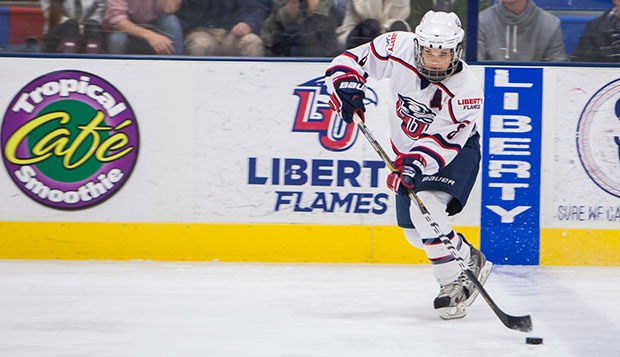 Lady Flames senior forward and alternate captain Jenny MacArthur lifted Liberty to a 2-0 lead with a shot from the high slot late in the first period.

The Lady Flames (5-0) had five different goal scorers in the 5-2 triumph over the Minutewomen (2-2), who had won all three meetings last season.

Liberty jumped out to a 2-0 first-period lead on perimeter shots by senior forwards Sarah Stevenson and Jenny MacArthur that found the five-hole of Massachusetts senior goalie Kasey Zegel.

Stevenson's shot came from the center of the left circle with 9:14 left in the period before MacArthur capitalized on a power play, receiving a pass from senior forward and captain Carrie Jickling at the top of the right circle and unloading a slapshot that threaded its way through Zegel's pads.

"We came out a bit flat in the first period and then picked it up as the game went along," MacArthur said. "We had a lot of our seniors step up today. We've got good team chemistry going and that put us over the top. We stay positive and the more positive on the bench, the better we play on the ice."

The Minutewomen cut the deficit in half with 13:09 to go in the second period when freshman forward Brittani Lanzilli started a break up the right wing and managed to get to rise up after being taken down in the right circle by Lady Flames defenseman Autumn Kucharczyk. As she slid to her feet, Lanzilli lifted a shot that beat Liberty's Kristian Toppazzini to the upper right corner, snapping the junior goalie's 150-minute scoreless streak to start the season.

The Lady Flames added two goals in a span of 24 seconds five minutes into the third period to extend their lead to 4-1. Senior defenseman Madison Fischer received a crossing pass deep in the offensive zone from sophomore forward Courtney Gilmour before the puck deflected off her skate and stick and off the left post and in with just under 15 minutes to play.

Junior forward Catherine Burrell then recovered a shot by Fischer from the right high slot that ricocheted off the boards behind the cage to near the left post, where she lifted a tough-angled backhanded wrist shot over Zegel's shoulder into the upper netting.

UMass got one goal back with 3:16 remaining in regulation when sophomore forward Michaela Tosone finished a fast-break assist from Lanzilli from in the left crease inside the right post.

But Liberty senior forward Amanda Grainger capitalized on an empty-netter two minutes later after taking a faceoff from Jickling on the defensive end, skating along the left boards, and firing right after crossing the redline.

"It was a great way to start off our season and a good way to go into next week, when we'll play at Colorado and Colorado State," MacArthur said.