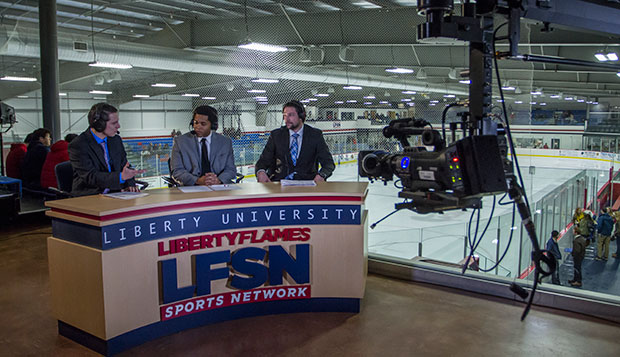 Seven Liberty Flames Sports Network (LFSN) broadcasts of Liberty University's ACHA Division I men's hockey games will be picked up by ESPN3 this season and streamed to more than 90 million homes.

The game coverage will be crewed primarily by digital media majors in the School of Communication & Creative Arts (SCCA).

"It's a very exciting opportunity both for the hockey program — for the recruiting opportunity for the coaches and exposure for the players — and also for our broadcast students," said Russ Martin, Liberty's executive producer of broadcasting communications. "The opportunity for them is terrific because they can put on their demo reel that they worked on a program that was put on ESPN3."

The network will stream the Flames' ACHA openers against the Naval Academy, which ended Liberty's season in the second round of the National Championships, on Sept. 19-20. It will then pick up LFSN's broadcasts of games against Arizona (Oct. 3-4), Virginia Tech (Dec. 6), and West Virginia (Feb. 13-14).

"We're really looking forward to it," said Kirk Handy, Liberty's ACHA DI head coach and senior director of campus recreation. "It is a fantastic opportunity for the students who will be involved, to get to broadcast a game on ESPN3."

All seven home games will be streamed live at 7 p.m. from the LaHaye Ice Center and available to be viewed on ESPN3's video on demand link for an extended amount of time afterward.

"It's a great opportunity for our program to gain some more viewership and exposure, to showcase the arena and also Liberty University," Handy said. "It will also showcase the league. People will be able to see the quality of hockey in the ACHA."

Martin said ESPN typically does not make room for Club Sports programming on its viewing schedule, but made an exception for Liberty due to the quality of LFSN's broadcasts. Eight Liberty Flames Baseball games carried on ESPN3 were entirely crewed by students this past spring.

"They told us last week our broadcasts are as good as anybody's in the country," Martin said. "We're probably two years ahead of most schools with our student-run productions."

LFSN was a finalist at the College Sports Media Awards this summer for its "Saturday Night Hockey" special coverage of the Flames' game against top-ranked Arizona State on Jan. 25. This past spring, ESPN3 streamed more NCAA Division I baseball games produced by Liberty than any other university in the nation.