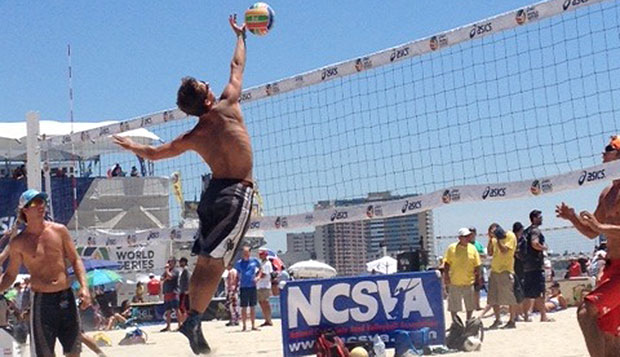 Mike Morrision watches as Aaron Brooks spikes the ball for Liberty during a match at the NCSVA championships on July 24.

"Mike and Aaron tend to play up," Flames Head Coach Rachel Willis said. "They play relaxed and free, so competition tends to be fun because they make sure (opponents) earn those points. It's fun to watch them in that environment. They thrive in that."

The duo finished 1-3 in an extremely challenging pool and didn't advance to the six-team playoffs. However, they gained invaluable experience in the 10-team national tournament, played on the same beach as this weekend's World Series of Volleyball's open event.

After winning their third round of pool play by forfeit, Morrison and Brooks lost their final match against a Webber International (Fla.) University duo led by Poland's 6-foot-6-inch Piotr Marciniak, who won an AVP national volleyball league title last week.

"We played them at Siesta Key, Fla.," Willis said. "Both matches were really fun to watch. We had a couple great tools (hitting the ball off a block that goes into the net or lands wide), some amazing hits, and some one-handed stuff."

The Flames picked up plenty of tips prior to match play, receiving personalized instruction at nearby Manhattan Beach from Eric Fonoimoana, a gold medalist in the 2000 Summer Games in Australia.

"Aaron and Mike spent a lot of time working on getting into a rhythm," Willis said. "They saw the court really well today and when they got a good pass, they had a good set and they were really efficient in putting the ball away."

Both the men's and women's division pool play matches were decided by one game to 28 points.

The Lady Flames' NCSVA tournament entry, rising sophomores Jules Johnson and Morgan Horne, were swept in their pool by three teams from NCAA Division I programs — Florida, South Carolina, and a mixed duo from Georgia and Louisiana.

"It was tough because they were working with a new defensive system where they had to put up a defensive block on every play," Willis said. "They didn't have many reps at it, but the girls adjusted really well. They ran down a lot of balls and it was good to see them progress so quickly."

Offensively, the pair was forced to use a greater range of attacking options.

"It took about half a game before they got comfortable with it and then they did a great job ofreading the defender, reading where the block was, and making good plays," Willis said. "We also got a couple aces with our serves."

Horne and Johnson benefited from working out with three-time U.S. Olympian Holly McPeak.

"It was really useful training for three days at Manhattan Beach," Willis said.  "I don't think we would have been nearly as prepared on the blocking system otherwise. Holly McPeak had a lot to say about utilizing their strengths."

Willis said Manhattan Beach is known for having the deepest sand in the world.

"It's so much harder to move when the sand is very deep and when we came over (to Long Beach), we were jumping noticeably higher," she said.

The players also learned how to adjust their games to different weather conditions.

"The wind is very strong as well, and it's a different wind that comes off the ocean," she said. "Every beach we've been to has had different winds and different sand. It was good for us to learn and to prepare our game plan and our strategy."