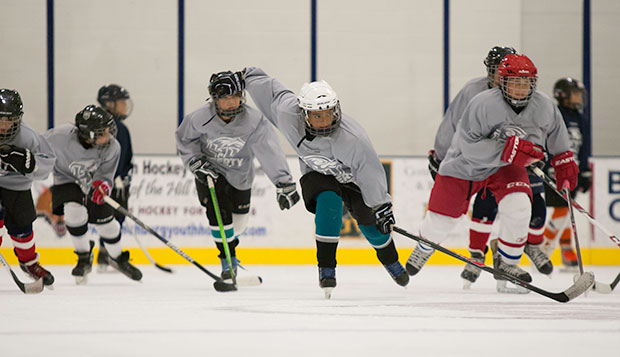 More than 80 players ages 7 to 11 participated in last week's first overnight hockey camp at the LaHaye Ice Center before more than 100 players ages 12 to 17 turned out this week.

"My skating, stickhandling, and shooting have improved," said Meistrell, who has played the sport since the age of 4 and is now a 12-year-old center on the Blue Ridge Bears Pee Wee team in Charlottesville, Va.

He enjoyed the other activities Liberty offered on campus, too, which made the camp experience all the more memorable.

"I like the fun things we do on and off the ice, the indoor soccer, swimming, and Snowflex," Meistrell said.

Record numbers of campers participated in Liberty's hockey and ski and snowboard camps this month at the LaHaye Ice Center and Liberty Mountain Snowflex Centre, respectively.

"It's been busy," said Kaycee Tripp, recruitment coordinator for Liberty's Club Sports department who handled registration and check-in for the hockey camps. "We have 103 campers for our last overnight camp this week so it's a pretty big group. We're excited."

Jeff Boettger, the Flames ACHA Division I men's associate head coach and associate director of Club Sports, said the numbers of campers have grown steadily over the past three years — nearly doubling in all to more than 200 this year — creating a need for additional sessions.

"We've had big growth this year," Boettger said. "We went from where we had just one week of camp to three weeks, with two residential camps. This year, we kept the day camp, and that doubled in size, and then we started a first-ever girls camp."

Most of the campers have come from Virginia and North Carolina, including Richmond, Roanoke, Charlottesville, and Raleigh (N.C.), as well as Hampton Roads and Northern Virginia. A few came from as far as Florida, New York, and Illinois.

The first week of overnight camp was geared toward players between the ages of 7 and 12, though some, including DI men's hockey Head Coach Kirk Handy's sons Parker and Preston, were as young as 5. This week's camp is directed to the 13- to 17-year-old crowd, including several prospective Liberty players.

They received quality coaching, under the direction of Handy, Boettger, Assistant Coach Jake Hannon, Assistant Director of Club Sports Dave Semenyna, and ACHA DII men's Assistant Coach Mike Morrison, who have instilled in them a love of the game while developing their fundamental and technical skills on the ice.

Sophomore defenseman Chase Harris and goalie Blair Bennett, who graduated in May, returned to serve as coaches.

An all-star staff showed up for Snowflex's Next Level Ski and Snowboard Summer Camps this month, including U.S. Olympic snowboarder Andy Finch, who helped broadcast the Snowflex Games in April after providing commentary for Fox News at the 2014 Winter Olympics in Russia; Benji Farrow, a current member of the U.S. Snowboarding pro team, and X Games participant Ryan Paul.

As Snowflex prepares to celebrate its fifth anniversary on Aug. 2, participation in its camps has continued to snowball.

"We've got 125 campers this week. Last week, we had 108," said Drew Sherwood, general manager of LMSC and the nearby Liberty Mountain Skate Park, site of the inaugural Next Level Skateboard Summer Camp which drew 15 campers. "We're looking to expand that one. We've had over 25 people pre-register for next year's (ski and snowboard) camps already."

Campers receive excellent individual attention at Snowflex, and the opportunity to try other extreme sports during free time.

"For every seven athletes, we have one coach or counselor responsible for overseeing activities on the hill and in the afternoon, when they get to play paintball, go swimming, play indoor soccer, climb on the rock wall, and go skateboarding," Sherwood said.

From July 13-18, Liberty's overnight wrestling camp drew 35 middle and high school athletes after its youth camp attracted 18 elementary school athletes in late June. The camp for younger wrestlers took place in the Wiseman Wrestling Room before the high school camp was held in the Schilling Center.

Throughout the week, hockey players and wrestlers stayed in the Hill Dorms while ski and snowboard and skateboard overnight campers spent the night on East Campus.

In the mornings, a counselor shared a testimony before the campers were divided into teams for conditioning activities, competitive games, and a tournament on the last day. Every evening session closed with a devotional from the coaching staff.

"It was a good camp in the sense that it was a good ministry outreach," Flames Head Coach Jesse Castro said. "There was a lot of good spiritual interaction going on."