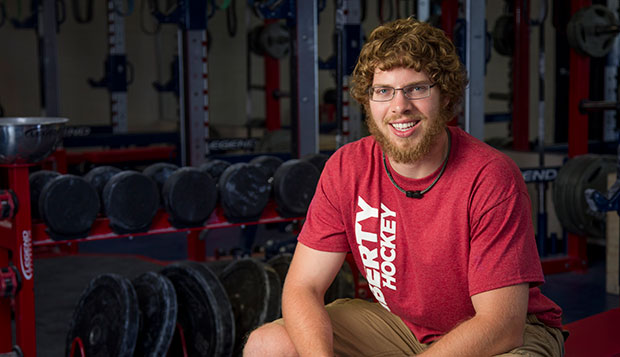 Chris Kerr wants to raise the bar for the Club Sports program by training athletes to be the best they can be in their chosen field.

In the spectrum of strength and conditioning, there are two extremes of coaching styles.

One seeks to preserve the health of the athletes above all else, exercising tremendous caution and prioritizing form and safety first, above physical results.

The other resorts to doing whatever it takes to achieve high performance levels, even at the risk of injury.

Chris Kerr, an Exercise Science major hired last week as Liberty University's new Club Sports strength and conditioning coach, has branded a philosophy that combines the strengths of both approaches.

"I feel in the strength and conditioning world there's the coach that only focuses on sound technique and mechanics, making sure everything's perfect and the athlete stays as healthy as possible," Kerr said, "and then there's the coach who really makes sure that their athletes are big, fast, and strong. I want to blend the two so that my athletes are big, they're fast, and they're strong, but they're also really healthy on the field, with good and proper movement."

Through his coaching position with Crossfit Lynchburg, Kerr had the opportunity to work with a number of former collegiate athletes.

"In working with them, I saw that… they had more athleticism and were able to pick up new things a lot quicker than others, and I started to realize that it's exciting and a lot of fun to work with people who are at a really elite level," Kerr said.

Through word of mouth, Kerr found out that Liberty's Club Sports department was looking for someone to head up its strength and conditioning program and applied on a whim.

"I wasn't feeling too confident about actually getting the job, just because I'm so young," Kerr admitted.

Once the interview process got rolling, though, he settled in quickly. The fitness fanatic found the questions and topics that came up familiar, and enjoyed leading trial training sessions that introduced the staff members screening him to his weight room style and methodology.

Not long after, Kerr was called in and told he got the job.

"It was exciting," he said. "At the college level, the caliber athlete that I'll get to work with will be a lot more elite than anything I've worked with before, so I'm really excited to take that raw talent, coach them on great form and see what my program can do for them."

Kerr plans to tackle the challenge of developing the wide variety of Club Sports athletes by identifying their personal weaknesses and transforming them into strengths. His goal? Stronger, more complete athletes.

"I'm working with student-athletes who are here at Liberty to play a sport and to win, and I want to be a part of that process," Kerr said. "I want to make them the best athletes they can be so that when they go out on the field, ice, court — wherever — they'll be the best that they can be."

With that winning mindset and commitment to both protect and push his athletes, Kerr will help Liberty's Club Sports program continue to raise the bar in its pursuit of excellence.