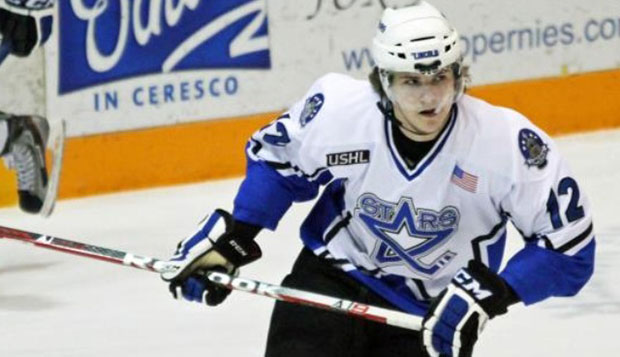 Michael Bunn had an auspicious debut with the Lincoln (Neb.) Stars of the United States Hockey League before playing for two other junior league teams last year.

Incoming Liberty University ACHA Division I men's hockey freshman right wing Michael Bunn showed his offensive potential with the Lincoln (Neb.) Stars in the United States Hockey League (USHL) when he netted a hat trick in his first game and was named USHL Forward of the Week.

Last season, after being traded from the Connecticut Oilers of the Eastern Hockey League (EHL) to the East Coast Eagles of the United States Premier Hockey League (USPHL) in his hometown of Wake Forest, N.C., Bunn scored 36 points in 19 regular season and five playoff games.

"We are super excited to have Michael Bunn coming in," Handy said. "He's going to be a guy that will help us offensively, scoring goals. He's someone who likes to shoot the puck and he has a good set of hands for a big guy. He's 6-foot, 1-inch, 195 pounds. He'll definitely be able to help fill the void after graduating some of our top scorers from last year."

Liberty graduated forward Andrew McCombe, its offensive leader and team captain. Bunn, who turns 20 on July 19 and will be classified as a freshman when he arrives in August, will complement the Flames' top returning scorer, senior center Lindsay LeBlanc. Liberty will be his first collegiate team after he played with three junior programs and spent the first three years of his prep career at Culver Military Academy in Indiana.

"It's going to be good for me for my spiritual growth," Bunn said. "I've heard great things about the program and I love that I get to continue playing hockey."

He expects to make a smooth transition to the Flames after traveling to Lynchburg twice a week the month before school starts to join the team in its early-morning skate sessions at the LaHaye Ice Center.

"I'm working out very hard this summer and planning on making an impact at Liberty this season," Bunn said. "I consider myself a playmaker and someone who puts the puck in the net on a regular basis."

While many of his Flames teammates come from Canada, Bunn grew up in what is now becoming a hockey hotbed in North Carolina.

"The Carolina Hurricanes (based in Raleigh) have done a lot for youth hockey down here," he said. "Hockey's getting bigger every year."

Bunn jumpstarted his hockey career at the age of 14 when he left home to play at Culver, where he developed his leadership skills and excelled in a rigorous academic program.

He plans to study either Sport Management or in the School of Business at Liberty.