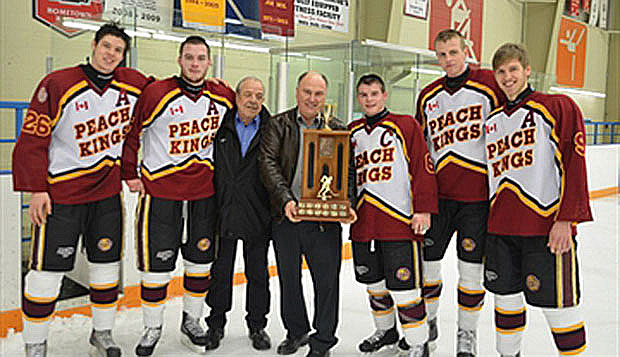 As captain of the Grimsby Junior 'C' Hockey Club, defenseman Peter Shantz (left) led the Peach Kings to All-Ontario championships in 2011 and 2012.

Defenseman Peter Shantz played key roles in securing tournament crowns in 2011 and 2012 for the Grimsby Junior "C" Hockey Club, a perennial power in the All-Ontario championships.

The incoming graduate student hopes to help Liberty University's ACHA Division I men's hockey team — which was ranked as high as third before being eliminated by Navy in the second round of the American Collegiate Hockey Association DI national tournament last season — get over the postseason hump next March.

"Defense wins championships and you have to build from your goalie out," Shantz said. "I'd like to think I'm another solid block they can build around to work toward a national championship, which is the ultimate goal. Anything else on the ice would be a failure. You have to live each day with your eyes on the prize."

Shantz completed his undergraduate degree in economics at McMaster University in his hometown of Hamilton, Ontario, this spring. Though this will be his first season of collegiate hockey, his veteran leadership and winning mentality will be tremendous benefits.

In his last season with Grimsby, when he scored seven goals and distributed 16 assists, Shantz was named not only the Peach Kings' best defensemen, but also their best team builder.

"The biggest thing from Pete is he's someone who knows how to win," Flames Head Coach Kirk Handy said. "He's won at different levels and adds a pedigree to the program that we need. We need proven winners, and that's the thing about Pete. He has the ability to be a leader on our team."

A right-handed defensemen, Shantz brings other strengths to the table that make him a good fit for the position, and Liberty's program.

"We wanted someone who also has the size we were in need of, which is a big positive attribute with Pete, who's 6-foot-4, 205 pounds," Handy said. "He's a very lean guy and because of his size, he's able to cover a lot of ice. He will be a big part of our team on and off ice."

Shantz, whose older brother David was a goalie drafted by the Florida Panthers in 2004, is extremely excited to join the Flames.

"My personality in the dressing room, and personal values, the whole persona, go right along with the Liberty way," Shantz said. "It's a good fit all around, from a personal level and spiritually, it's going to be a phenomenal year for me. This is going to be a lot of fun. I'm really looking forward to it."

Shantz has never lived outside of Hamilton. However, during a visit to Liberty last spring, he stayed with fellow defensemen Jackson Kuhn and rising senior captain Matt Sherry, who both grew up approximately two hours from his hometown.

"This year's going to be a new test for me," said Shantz, who will pursue a Master of Arts in Human Services Counseling degree with a business emphasis. "It's a great opportunity, wherever it takes me. I'm hoping to use this as a launching pad to open up doors, build bridges and connections. Where God leads me is totally up in the air right now."

Though Kuhn has graduated, Shantz is glad to have Sherry as a mentor, both on the ice and with his graduate studies.

"Matt Sherry is a phenomenal choice as team captain, a really special guy," Shantz said. "To be playing with him and with him leading the group back there, that's just awesome. He's working on his master's degree, too, so he can show me the ropes."

"It's a great group of skilled guys back there, a terrific group of really good character guys," Shantz said.

He looks forward to getting the puck out on transition to a talented corps of forwards that includes senior Lindsay LeBlanc, who led Liberty with 56 points (25 goals, 31 assists) last season.

"I know Liberty's got a phenomenal group of forwards that are unbelievably skilled," Shantz said. "With the new recruits coming in, there's a lot of firepower up there. As long as I can get the puck up to them, they can do their jobs."

He is prepared for the challenge of transitioning from junior hockey in Canada to the collegiate game in the United States.

"The guys playing in the ACHA are stronger and the battles in the corners are tougher," Shantz said. "Nothing's going to come easy. Getting in the right mindset and getting in the rhythm and tempo of the game, it will take a little adjustment. I'm going to go out there and battle every shift."