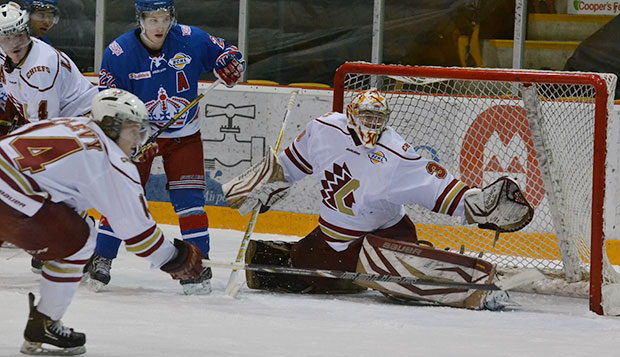 Josh Halpenny stretches out to make a save in a game last season with the Chilliwack Chiefs in British Columbia.

For Josh Halpenny, the decision to join the Flames' ACHA Division I men's hockey team was an easy one.

The 5-foot, 11-inch, 162-pound goalie for the Chilliwack Chiefs of the British Columbia Hockey League (BCHL) fell in love with Liberty University during a College For A Weekend (CFAW) visit.

"The campus is extremely nice, especially with all the new buildings going up. The brand new library is so cool. Everything looks awesome," Halpenny said. "And it being a Christian university definitely drew me in over other schools."

It was the hockey, though, that sealed the deal.

Halpenny got an early start on the ice. His dad, a hockey enthusiast himself, signed his son up to play for the first time at the age of 5. He was given the opportunity to try playing goalie early on and never came out of the cage.

Halpenny expects his experience between the pipes to make him an immediate contributor to the Flames' squad, both on and off the ice.

"Hopefully I'll be able to move into the starter position eventually and help them out that way, of course," said Halpenny, who replaces Blair Bennett, who graduated, on the roster and will battle for playing time with sophomore Matt Pinel. "But even if I'm just in a supporting role on the bench, I hope to be able to be a positive (influence) and just keep the guys motivated."

After all, it was the team culture and environment that ultimately sold Halpenny on the Flames. Throughout his interactions with coaches, staff, and soon-to-be teammates during CFAW, Halpenny's college decision became crystal clear.

"The atmosphere with the guys is great," Halpenny said. "I met most of them, and everyone was super nice … and great to get along with. I've met all the coaches and kept in contact with them … and the staff is just awesome, extremely friendly. I feel like with all of them we definitely have a shot at a championship, and I'm definitely excited. It would have been hard to say ‘No' to them."